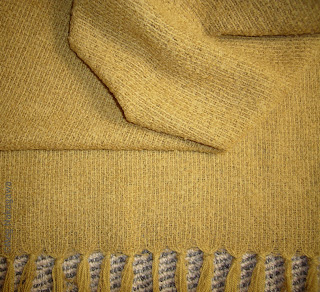 My finished piece. (Yarns discussed here.) 12.5EPI; first time I used a boat shuttle on a Rigid Heddle, but it worked well. I wished I photographed the shuttle; it was thin and long (about 30-35cm?) and most probably one of Mama's loot from Sweden last century.

I haven't decided what I want to do with the fringes.  The overall texture is soft and... frothy; I might be tempted to call it angel wing if it were white or pale blue, but the Polwarth warp gives it some heft.  The generic look is devoid of personality and reminds me of something from a low-end department store, (which I frequented while home,) partially due to the rather drab yellow/green/light brown. But I'm not dissing it, just describing. It is a color that goes with a whole lot of things I own, and it'll be a very handy piece. 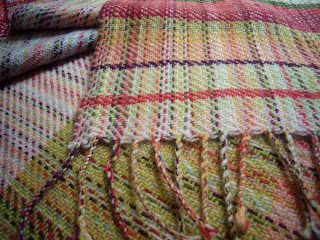 This is a cashmere piece Mama wove after we experimented with whimsical warp making almost three years ago. She wore it for a couple of seasons, and now I've pinched it.  It's not only warm and light, but has a slightly meatier feel than cashmere scarves I weave, with same/similar yarns.
Posted by Meg at 12/27/2011 12:52:00 PM