This morning, (OK, almost midday,) I weeded and cleaned my flower pots in the rain, (because I didn't get out earlier).  I was going to start earlier but I had a wee tour of favorite book-selling sites, culling Wish Lists, and a bit of shopping around for weaving and art books.  I ended up buying one detective story from Amazon.uk for 1p - with postage, it cost me 7.01 pounds; I put it on the list while in Japan because its translation got a favorable reviews on my fav book review TV program.  I'm enjoying buying inexpensive used books.  Did I tell you I bought four design books while in Japan for Y1 each, (Y251 including postage,) and another for Y53? 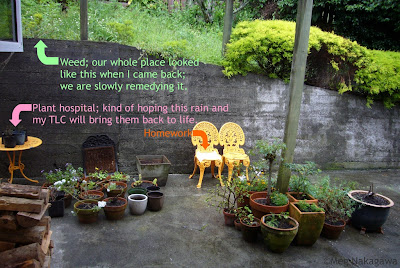 I found a few things relating to Randy Darwall's I hadn't been aware of:

The First is a short radio piece from September 2009, on their local (I think) radio station.

The second is the start of an article in Ornaments magazine from December 2010.  Then I discovered 23 issues of Orgaments magazine can be downloaded for US$3 - there is a Goddess after all!

I would love to take his workshop again sometime, perhaps in 2013.

Here are a couple of websites/pictures I came across in the last couple of days.

AUT is an Auckland tertiary institution.  I was particularly taken by the blue piece at the bottom; I saw a lot of lovely manufactured felt ornaments delicate shapes cut out in Japan and first I thought it was felt, but it's leather!

The other is about a Moroccan exhibition.  Looking at the thumbnail photos at the bottom, I felt so at peace that weaving is a slow en devour, and that it's OK if I'm not a prolific weaver.

I've been reading "The Artist's Reality: Philosophies of Art" by Mark Rothko.  More accurately, I'm stuck in the long introduction by his son, editor and psychologist Christopher, who was six when Rothko died.  Mark Rothko's words were written in late 1930's/early 1940's before he arrived at his brand of abstraction, and he never finished the book.

Christopher relates a Rome exhibition with the book (in two parts - Sister Kate has two clips as well.)

2008 The Guardian interview with Kate Rothko on the eve of Tate Modern exhibition.