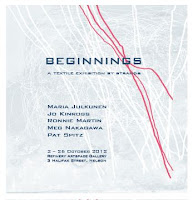 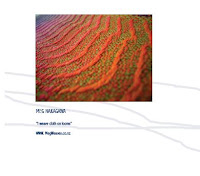 Catalogue: "I weave cloth on looms." 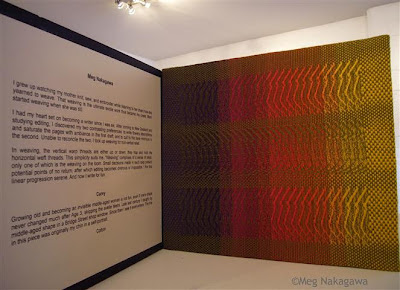 I grew up watching my mother knit, sew, and embroider while listening to her chant how she yearned to weave. That weaving is the ultimate textile work thus became my creed. Mom started weaving when she was 60.

I had my heart set on becoming a writer since I was six. After coming to New Zealand and studying editing, I discovered my two contrasting preferences: to write flowery descriptions and saturate the pages with ambiance in the first draft, and to cull to the bare minimum in the second. Unable to reconcile the two, I took up weaving for non-verbal relief.

In weaving, the vertical warp threads are either up or down; they trap and hold the horizontal weft threads. This simplicity suits me. “Weaving” comprises of a series of steps, only one of which is the weaving on the loom. Small decisions made in each step present potential points of no return, after which editing becomes onerous or impossible. I find this linear progression serene. And now I write for fun.

Curvy
Growing old and becoming an invisible middle-aged woman is not fun, even if one’s shape never changed much after Age 3, skipping the svelte teens. Late last century I caught my middle-aged shape in a Bridge Street shop window. Since then I see it everywhere. The line in this piece was originally my chin in a self-portrait.
Cotton 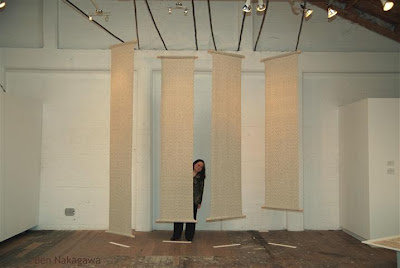 West End (of The Silk Road)

As a child growing up in Japan, I knew the Silk Road started at our end, winding through China and India, reaching somewhere beyond the Big Buddhas. I imagined colorful cargo undulating on camelbacks.

Early this year I learned there are indeed tributary routes crisscrossing my old stomping grounds; silk products from the region were collected in Hachiohji City, transported on carts pulled by animals or carried on the backs of men, to the port of Yokohama and shipped beyond. I imagine growers and weavers in years past may not have known where their silks went.

This is a mirage of the old capitals in the West imagined from my end of The Road.
Wool, pine

Buttons covered in handwoven cloth (and this is the best Ben or I could do with the colors.)


Postcards: my postcards are not in the Strands Shop, but at the front of the gallery for now. We are meant to give the pinter 24 hours for orders, but depending on how you look at it, I gave them 4-7 hours, so I wasn't sure my cards can be done. The printer got them done, but by then I was too tired to negotiate a plinth, so I'll go do it next week.
Posted by Meg at 10/06/2012 05:33:00 PM