But I haven't been sitting around saturated in envy. In no particular order in roughly the last ten days: 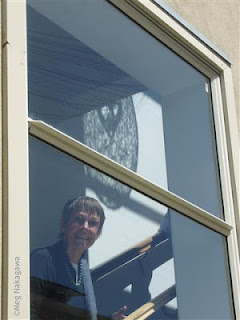 Joan McLauchlan, Win, Chris and Rose came over from Marlborough to see "Beginnings" on Tuesday; Esmae joined us. This is Joan looking out the window while I tried to capture the light fixtures; from memory they were string-like fiber molded and stabilized until hard with some kind of liquid, after which the fiber shapes were bisected, the molds removed, light bulbs inserted, and shapes reassembled.

I feel I have to "host/entertain" when people come to see my work; by doing so I miss the chance to listen to what they think. I missed a good chance. It's that old, familiar performance anxiety. 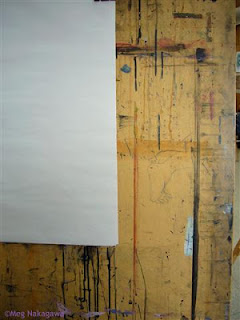 I am back in Ronette's drawing class, but on Wednesday nights because the Friday morning class is full. I know none of my classmates; they don't know I'm a little... different. Or maybe I'm no more so than they. I loved the foot on my board I picked up randomly. 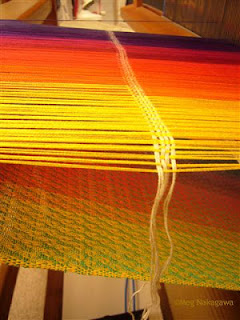 I finished weaving two scarves; had there been 20cm more warp left, I could have woven a third, but that not being the case, I shall weave more small twill fabric so I can make more buttons in the future. Our local craft store is out of 14mm and 17mm wrappable buttons; 12mm seem so tiny and 19mm too large for my purpose. 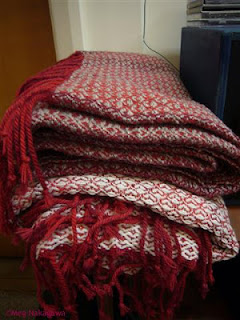 Two Hearts blanket have been ready for washing for yonks, and the weather dry and perfect for the task, but I've not felt much like pressing big pieces so they sit a-waiting. 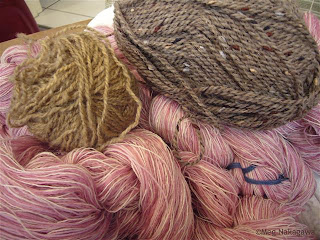 I made warp for Hearts Blanket's little sister in color schemes requested by Grandma; one soft pink knitting yarn, one blue-y pink weaving yarn and a mohair are treated as one. I've enough for two because I like the weft on the left better but am not sure if there is enough; the weft on the right I have more than enough but it finishes the cloth harder than I want. 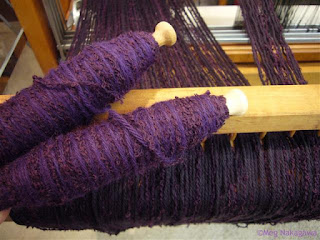 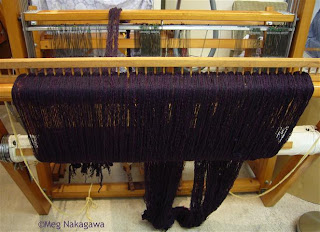 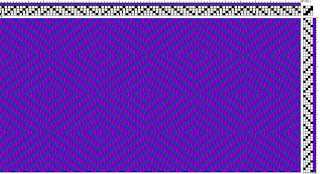 I don't often weave for myself but I wanted a new couch blanket in purples; it turned out I don't have enough purple wool, but I can make a big wrap/shawl, about 90cm wide and, well, the warp is nearly 3 meters!

The warp is an unknown wool in black purple from Mom's stash; she started knitting something so some of the balls were crinkly like instant noodles; that's paired with a burgundy/grape merino boucle and I'm threading them in opposites. The weft is purple alpaca I bought from Elann.com ages ago when I fell in love with the color, together with the same boucle. It's been a while since I last used almost the full width of the 4-shaft Jack. It's been ages, (15 years?) since I planned a 10DPI/20EPI warp, and I wrapped and checked gazillion times, (21 pairs in an inch,) but it feels like I should sley the pair together 8DPI/16EPI. 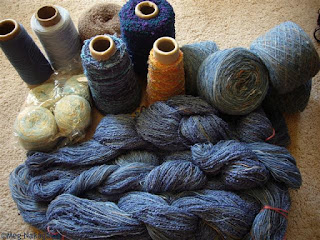 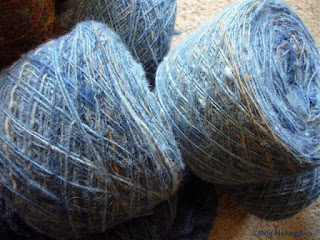 The Cherry Blossom blanket I planned for Mom a few years ago shrank too much and ended up much narrower than I had hoped, and somehow became Dad's blanket. But Dad's become increasing frail and I'm afraid he's going to trip over the fringes one day, so I thought to make a ruana with a similar fabric, with boucle in the warp and the weft, but a shortish one so it covers him to between below the waist and not below his knees. I wanted to use Mom's lovely handdyed, handspun blue yarn as a base, but the boucle I intended to combine in the warp (the saturated blue and green one,) was too strong and killed the sporadic natural/brown bits in Mom's, so I lined up all suitable merino and boucles and made a mishmash of a warp. This is going on the 4-shaft loom after my purple piece, and will be woven in plain weave, double width for the back, two layers for the front. I have no idea what is going to be the main weft; there is Mom's handspun green yarn, (not photographed,) which would create a lovely texture but I may, if lucky, have enough to weave about 30cm of the back. It will end up like a patchwork of colors and textures, but inadvertently it's also going to turn into a good stash-reduction project of my nicest wools.

Stash was what Pat and I talked about while we "womenned" the gallery yesterday for a couple of hours. I was disappointed Pillars used up surprisingly little. I now freely admit I'm delusional if I think I can make headways into my current stash in a "few" years; I think, if I stay productive, it's more between five and ten years.

Pat recommended I read "Art & Fear" by David Bayles and Ted Orland some time ago. Last week it popped up on sale at Audible.com and bought it right away, and man, this is good. It's a pre-New-Age, tell-it-like-it-is, short and sharp description of how we may feel/perceive/think as makers and putting them in context. I've never felt fear that I've been aware of, more disappointment or anger, yet this book is exactly what I needed now. I've listened to it twice so far, but wouldn't mind having a used paperback to read, reread, highlight, underline and scribble in the margin.

I'm going home for six to eight weeks in Jan/Feb/Mar, and I've started looking into air fares and schedules. I've signed up to a Kay Faulkner (Australia) workshop in April; it's residential, plus I need transport to there and back, but I've never been to Whanganui and my good friend Joan Rosier-Jones has made it her home a few years ago and I've never visited her there, either. And I thought it may mark a nice "full circle" at this juncture. I just have to weave a whole bunch of merchandises between now and my trip. There is also a "market" day on the last day of this workshop, so I shall schlep buttons, as well as scarves, then. I mustn't forget: I've got the Sketchbook Project to work on before I leave for Japan, too.

Finally, with Dianne and Alison's exhibition opened, I can pick Alison's brain about that same step where I get stuck in the design process. I'm looking forward to that.
Posted by Meg at 10/21/2012 03:45:00 PM