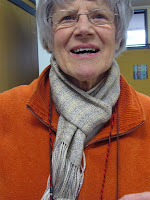 Back in October 2006 in Randy Darwall's workshop, many of the weavers wore beautiful scarves either they or their friends wove. (We tend to collect, too, don't we?) Among them, Jan Mortimore (seen here with a different scarf) wore a shadow weave scarf which so impressed me I asked if it was an original draft. Jan told me, "The 8-shaft book, dear, shadow weave, straight out of the book." So I had hoped to learn about shadow weave one day and weave something similar.

I've made my client Julie wait long enough. I was sure I said delivery would be mid/late August, but shock, horror, my email said late July/early August! So, for her, I think I can manage a two-shuttle weave, something quite out of the ordinary for me.

From memory, Jan's scarf was in two values of pale peach-orange, and the overall look was positively fluffy and elegant. Julie ordered a scarf in grays in cashmere, and I have black, white and four grays, so I'll experiment a bit and decide whether to use just two values, or go whole hog (do you use that expression?) and use four. 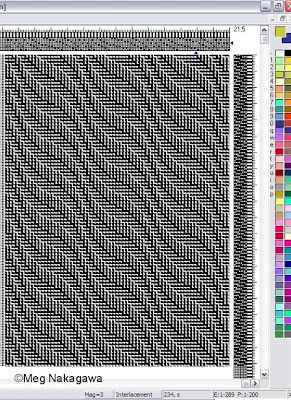 The draft is #301 on Page 77 of "A Weaver's Book of 8-Shaft Patterns from the Friends of Handwoven", edited by Carol Strickler, Interweave Press, 1991. I like #304 better, (and I think Jan's was #304) but I've borrowed Ronette Pickering's 8-shaft table loom and will be weaving on it for the first time, and it's quite a small scarf, so I think I'll keep it simple, with 16 picks to a repeat.

Straight out of the book. Haven't even read about Shadow Weave yet. I seldom do this, just following a recipe, but I'll have enough warp for at least one more, so after I finish Julie's, I'll read, make up a draft and rethread to weave the second one. Maybe not.
Posted by Meg at 9/14/2008 02:53:00 PM