Oh What Hilarity, This Weaving - Part 3

WARNING: THERE IS NEVER ANYTHING EDUCATIONAL IN THESE POSTS BUT BLESS YOU FOR READING. 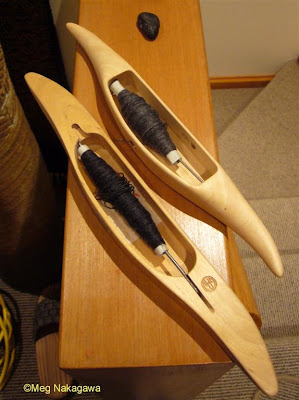 Too late to thread, but too early to quit, so why don't I prepare the wefts?

The top shuttle my Mom bought me on her last trip to Sweden and Finland about three years ago. I was saving it as a reward; I thought I'd use it after I won a prize or got into an overseas gallery or similar, but that could be years, so I decided to use it.

I have two of the bottom shuttle, but because the weft colors are so similar, I knew using different shuttles would reduce the chance of confusion. Well, with shadow weave, the wefts are strictly DLDL, so it's not that complicated, but what the heck, the new one was just sitting in a drawer in the stash room.

My bobbins are hand-made with old card that's slightly heavier than cartridge paper. The new shuttle's metal bit felt extraordinarily inflexible, so I kept cutting the bobbin shorter and shorter and tried to put the metal+bobbin back into the shuttle and I nearly bent both in half. After about 15 minutes of not-so-gently coaxing them into the shuttle, I was ready to ask Ben to cut the metal ever so slightly. But before that, I thought to give it one more go, and as I said I have a smidgen of Leftie genes, I switched hands, and whoa!, I discovered the bottom hole in the pic had a built-in spring!

Looks like when a kid cut his own hair, doesn't it; it got shorter and miserable-r.

So I'm feeling adequately stupid this evening. Couldn't even be bothered to move the yellow outdoor extension cord or fix the crooked carpet when I shot the pic. I'll thread, sley and sample tomorrow afternoon, then weave on Tuesday. At least that's the plan.
Posted by Meg at 9/14/2008 07:58:00 PM