Last Thursday, Marlborough Weavers were invited to join the Richmond Weavers for Richmond's monthly meeting. There were over 20 people, nine from Marlborough, including me and Sue Broad who doesn't belong to either this year, and the their meeting room is huge I couldn't get a nice pic to show the mood of the meeting. We did a very elaborate show-and-tell, mostly of our own work but also textiles from two members who traveled on the Silk Road earlier this year.

Show-and-tell I always like, but it's especially interesting when I see works by new (to me) people, their color schemes, and designs. And then it's not only the old-timers who do innovative works. Ann Udy, obscuring her face at far right, brought a plain/space weave felted scarf in white and green, I think, which was exquisitely crafted, but I forgot to photograph. 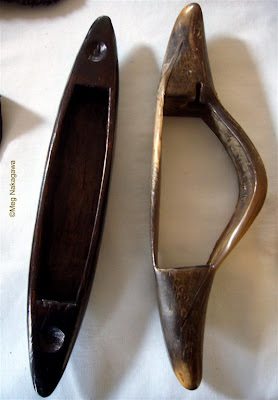 Joan's shuttles made of wood and horns (?) from NorthWestern China. 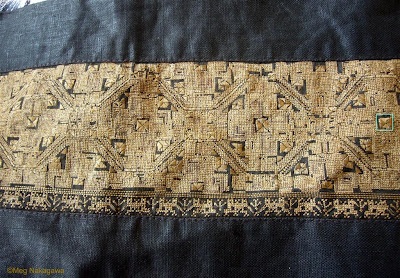 Joan's fine cross stitch in two beiges on black or dark indigo. The turquoise square on the right would have been slightly smaller than 1cm square.

Rosalie brought a felted scarf from Kyrgyzstan, which was amazingly modern-looking, but she said the coloring and the designs are typical of the area. I forgot to photograph that, too, and I can't find anything like it on the Internet. It was yellows, oranges and soft yellow greens, swirly circles and oblongs placed in a dynamic way, with centers of some of the shapes cut out.