Oh What Hilarity, This Weaving - Part 1

WARNING: THERE IS ABSOLUTELY NOTHING IN THIS SERIES OF POSTS WHICH WILL ASSIST YOU IN GAINING KNOWLEDGE OF ANY SORT WHATSOEVER... BUT IT COULD BE GOOD FOR A FEW LAUGHS.

Every new equipment, every new material, and every new weave structure makes me feel like a new weaver and I usually like it. More recently, it's made me realize how much of the work I do on autodrive if I'm weaving in a familiar environment.

This afternoon's task was to dress a borrowed table loom with a 9-inch-wide cashmere warp, in two grays, DLDLDL, 15 EPI, 134 ends. I made a warp half the usual length, about 4.5 meters, in case I have problems with the loom. Let's do this chronologically. 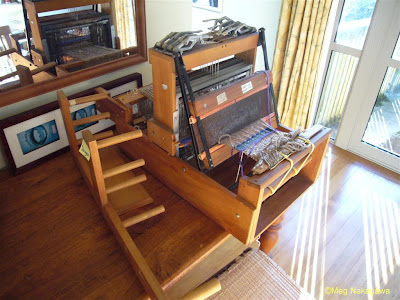 First the equipment and location. Ronette Pickering lent me the old Polytech sample loom, with the last student warp on it. Ronette thought this is a survivor from the weaving part of the Textile Diploma course, which, by the time I left the Polytech in 2000, was no more. Next to it is the inkle loom, and, ahem, at first I thought it was a funny looking warping "board" to make a short warp for the table loom. This still has a Post It with "Dungeon" written on it. All the Weaving School equipment, after the School (course, really) closed sometime in the 80's (?), were stored underneath the classrooms for around/over a decade, until the Polytech finally had a big sale in 2004/05. I assume these two were saved for Ronette, who was overseas at the time. They have lived in her well-appointed studio since, but she's been too busy drawing that these guys were left unloved.

You are in my kitchen. I'm almost out of space in every room we own; I could have done this in the living room, except I would have had to tiptoe around my drawing from Friday, which are strewn all over because I can't get the proportion right and I've been looking at them all weekend. Plus Ben was watching our own Scott Dixon (Indy driver) race, and there is only a few things I hate on TV worse than high-pitched car race noise. So, the kitchen. Note also the position of the sun.

Above the reed were two pieces of masking tape; one had the lifting order, and the other, "Over - In, Under - Out". The beater was facing the wrong way, so the reed would have been rigid and may not have reached the fell adequately. This could be why the student never finished the piece.
Posted by Meg at 9/14/2008 06:53:00 PM