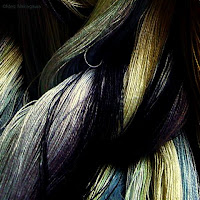 Last night Ben asked me how many exhibitions I was involved in this year, and I had to think. There was the Craft 08 in February, which I consider to be at the tail end of 2007, so really, only the wall at the Suter, and the walls at Fibre Spectrum. I participated in the Area exhibition, too, but for that I built up on the Suter collection; come to think of it, I even used them for Fibre Spectrum, so compared to the mad 16 months of 2007, I'd say in 2008 I did one and a half exhibitions. And I think I wove four commission pieces, with three more pending, but I can't be sure.

In July, I wove different kinds of things in a short time to send to Santa Fe Weaving Gallery, and though they didn't accept my work, (they wanted "edgy",) it gave me a chance to reassess what I want to weave, and the answer then was the fine cottons. It still is today.

Then I had my piece rejected by the National Guild Exhibition. The rejection itself wasn't a big deal; in fact I think I told you I wondered on the day I packaged it up that I've been lucky getting everything I sent accepted in the three (I think) Nationals, and this year could be my turn to get rejected. But the aftermath of trying to figure out what they meant by "too many technical errors" left a bitter taste. The saddest thing is, I still don't know what errors they meant, (I'm the last one to say I am a technically strong weaver, in spite of what even my close weaving friends tell me, so they had a willing audience,) and they probably think I'm still griping about the rejection.

The bitter experience was compounded by the difficulties I faced in trying to apply for a scholarship by the same organization. I won't bother with links, but in mid-December I received a strange email telling me I was unsuccessful; I wasn't surprised at all since they changed the rules after my package reached them, but the email contained a personal and unattractive paragraph at the end. On Christmas Eve, my application pack came home and I couldn't even tell if my samples were ever taken out of the pockets. All in all, these last months freed me from any sense of obligation or loyalty to the national organization, and I'm definitely taking time out from the national, and possibly the local guild, next year. The organization works for some people, so no disrespect, but it's just not for me for now.

Before the scholarship hooha, I resigned from the sample exchange group, which is a sub group of the National guild as well. There were several reasons, among them my lack of motivation and inability to meet the guideline-deadline, but I was also disappointed with samples woven by some of New Zealand's big name weavers. As a newbie, I joined this group because I wanted to learn weave structures, but also because I wanted to be inspired by the more experienced weavers, and this third lot was particularly disappointing. But I promised fellow members I'll send in my 2007/08 sample; that's one of those things on my Still To Do list.

I also parted way with Sue Bateup for the time being, amicably, of course. I needed to regroup and accommodate my changing work schedule/style/pattern; she graduated from her Bachelor's course and wanted to rebrand her gallery and needed others who could help pay the rent. But I liked being part of her gallery, she liked her time off, so we decided to see where the rebranded, renamed Maitai Gallery goes, and it's likely that in a year's time I'll resume minding her gallery and bring my things to sell when I'm there. And we also hope to have more robust discussions on our respective creative endeavors.

I still have a truck load of leftover projects on the To Do list as well as on the looms. My stash room, the house and the garden is a mess, made worse in the last few days because I'm still hoping to get some big cleaning done. Luckily my depression seems to have disappeared or gone into remission or however you say it, for the first time in over six years, so I'm disgusted and grumpy about the state of things, but I'm also hopeful I can sort it out in 2009. And that's an amazing feeling after so long.
Posted by Meg at 12/31/2008 02:30:00 PM