When I met Bonnie Inouye in 2002, she had business cards with her fabulous drafts. There were several versions, and I thought they were the most beautiful cards and I wanted to collect them like baseball cards. After her workshop, I bought Fiberworks PCW, and while making a whole bunch of drafts I wanted to weave, I was also on the lookout for a draft that would look good as a logo. 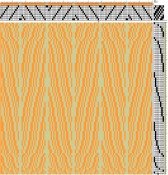 In late 2005 I had to issue a couple of invoices, so I hastily looked for candidates and selected this, which was my second choice. (The draft was never fine-tuned beyond this stage; it was my attempt at making a tulip-like picture.) I tried grays, blues and finally settled on pale yellows because I wanted either the background or the text, in Monotype Corsiva, in grays and I've always, always loved the grays/yellows combination. But because of the difference in the colors on the screen and what comes out of our ink jet, yellow grew darker, and finally, in order to produce enough contrast to see what's there, it became orange, formerly the one color I loathed! Text was in mid-neutral gray initially, and overall it had a soft, elegant image, or so I thought.

Martin didn't like the logo; he said drafts don't mean anything to non-weavers, and suggested to at least take out the threading, tie-up and treadling to clean it up. He disapproved the pale text because they looked weak and were difficult to read to some (older?) potential clients. So I compromised and made the text black, but I kept my logo.

I'm not so attached to this I'm adamant I'm keeping it; it's more like I'm used to this and can't be bothered thinking about a new one. I also have a digital camera now and know how to manipulate and use image files; these things I didn't have access to in 2005. I also know other ways to present the same draft within PCW, so I could try cleaning it up that way.

I realize logos, typefaces, and colors shouldn't be changed flippantly. But I guess I'm opening up to vibrant colors and perhaps I'm looking to add a bit of spunk in my image as well as in my work.

I bought a Bonnie scarf for Mom, and held on to it for about six months studying it, but around Christmas that year tag, label and card were sent with the scarf. And I can't remember much, though a picture of the scarf has survived in my head. Perhaps I should ask Mom to photograph them.

Sorry, I keep mixing logo, text, and color and there must be proper marketing lingo for all these components, but I don't know them. Right, future towels beckon me. It's going to be a hot sunny day and my cool basement is going to be heavenly.
Posted by Meg at 12/11/2008 08:43:00 AM