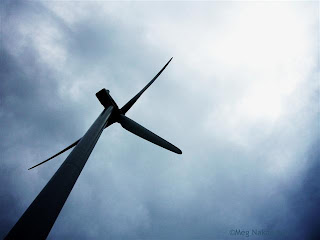 During our recent trip to the North Island, we went to see the wind turbines near the town of Ashhurst. The elegance of the turbine design combined with the massive number of them and the morbid dark sky surrounded me with a Doctor Who kind of creepiness. It was an other-worldly place and I wondered what creatures living in this place looked like.

My image of futuristic textile and clothing have been informed by the various science fiction TV series and films; stretchy, metallic (always silver and not gold), functional and "intelligent", which in the old days meant wrinkle-free, but nowadays could mean temperature/humidity-controlled, as well as wired up in many other intrusive ways. It could make me feel a slight discomfort when I reach for that second cookie!

While some of you are experimenting and creating with new material including electronics, I am more attracted to old designs and styles. This is definitely because I have a very poor vision of the future. Of course, I like to think I'm slowing down my life by reverting to an old craft, (even though I love working on my computer-controlled loom to speed up my multishaft weaving,) and feel the connection through the craft with weavers of the past, and the future. It's just that I can't picture a future weaver, say 100 years from now; I don't know what s/he would be wearing, what kind of a loom s/he would be working on, if indeed it would even look like a loom to me, and what would be on that loom. For some reason, I don't think it'll be a 2/2 twill in undyed merino on a wooden loom, though.