When I was supposed to be trying out new bras on Friday, Ben texted me to say his fav shop was having a sale and among other things were nice tweed jackets, so we met in the shop.  It turned out we both liked this one chocolate brown linen/cotton number, which fit him nicely.

I like buying clothes for/with Ben. He's lost a lot of weight and deserves a reward. But this piece cost a lot more than his pay grade, as it were, and Ben being a Jacket Man, he already has more jackets than pants. So I proposed we clean out his closet on the weekend and take an inventory. To be honest, I was going to propose we buy pants and perhaps a shirt or a pair of shoes instead. Besides, it's linen, and he never wears jackets in the summer.

Cleaning closets is something Ben may consider under extreme duress, and I had to wait until 3PM Saturday when he was persuaded to help me clean his closet. But it didn't take long, even with him putting on all of his pants. What we discovered were four pairs he'd bought/kept though he couldn't wear them, another pair he can wear but would be more comfortable in after loosing 2 more kgs, three pairs of shoes he'd bought but hadn't started wearing. Three pairs!!

While we cleaned, Ben told me that with the weight loss and him turning 50 in April, he wanted a fresh look. Nelson is a very casual place and his work place one of the most casual, (my previous chimney cleaner called it, "Oh, they have a come-as-you-are dress code,") so Ben's attires became less and less distinguishable from those of the students in the 12 years he's worked there. (Before that, he was a student there for three years.) Jeans, polo shirts and running shoes, in other words.

We threw away tired-looking items, downgraded a bunch to "home only", and set aside some still-OK pieces for charity. He still had more jackets than pants, but we don't need to top up the latter; he has enough shirts even if I didn't do the laundry for a month; and he has plenty of shoes. (Very important for diabetics to have comfortable shoes.) But he had only one other summer jacket. And I've always preferred nice pants, grown-up shirts and a jacket, even without a tie, for work.

That's how it came to be that we went to the store today to get him the jacket. He's very happy. It's his early 50th birthday, a big pat on the back for switching to a healthy life so quickly and effectively, and though this sounds a bit weird, a symbol for the first ten years of diabetes and, all things considered, dealing well with it.

People living with those with depression sometimes succubus to the same; at the least they have to live with the consequences. In my 10 years with it, a lot of things in our household went downhill, and this is another symbol that things are looking up for our team.

I'm hoping his new pride and energy is going to extend to home and property maintenance. Hint, hint! 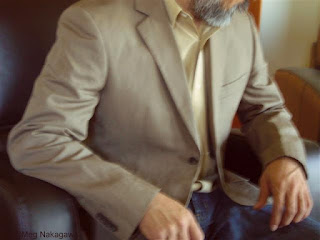