The cashmere pieces were mended, fringed, washed and pressed. The three scarves are OK as products; at least two will be suitable as gifts when I go home.

I started to read the 70 pages of Introduction and Prefaces to Riverside Shakespeare; I've a long way to go before I get to the plays and I won't be taking the book to Japan. It's amazing how much general information resides in that tome that I guessed existed but paid no attention to in the three and a half years in college; back then I only read the plays on the syllabus and the intro to each play. The reading has been interesting, but the book is heavy so I might have to make myself a beanbag pillow of some kind to hold the book. I am enjoying reading The Assassin's Cloak more; I won't be taking this to Japan, either, but I'm up to January 9 now. I like the "little bit every day" aspect.

I haven't drawn. We haven't gardened. But we've watched some movies, among them, or favorite baseball movie of all times, A League of their Own.

Italian? Well, yes! On New Year's Day, I thought I'd like to learn the names and locations of the 20 regions. Some of the names I knew turned out to be not of regions but of provinces, which are sometimes the same as the famous cities. 19 of the 20 regions are further divided into provinces, which are further divided into comune or municipalities. That's fine, I didn't intend to learn them all. But in 2014, apparently, the number and boundaries of the provinces are changing in a big way, so I'll stop at the regions.

I've been busy locating the regions and their capital cities on the map and saying their names out loud, but the visual approach, color-coding, learning the shapes, has been a gentle way back into studying the language and history than lists of words and phrases. I was surprised I could write down "map of Italy without colors but with regions' names" without thinking, (I studied Italian in 1995 for three or four months,) though I just strung words together and don't know if that is the way a native speaker would say describe it.

Yesterday I realized I wanted to learn the regions first because I wanted to learn about the characteristics of the city states I've read in Renascimento history and novels; I had this romantic notion that the modern political jurisdiction would overlap with the city states boundaries. Well, not exactly. I was also fascinated to read about the diverse dialectic/language variations in the north, (a subject out friend Gino has an abundance of knowledge,) and some of the history lessons from my school days came into use.

The foot is fine; it doesn't hurt and nothing is broken, but it swells if I stand/walk on it for too long. Yesterday it was too swollen to fit into any shoes. Ben thought it looked like a latex glove filled with fluid, and that's exactly how it felt; movement didn't hurt but vibrated. I was hoping it will turn spectacularly purple so I can take a commemorative shot, but this morning, Day 4, the swelling is down, it's not as hot as the previous three days, and looks ever-so-slightly bluer than the other foot. I'll stay off it another day or two, then maybe I can weave on the Jack standing up by the weekend.

I leave for Japan in a month and a day. In that time, I must work on and send off the Sketchbook Project sketchbook (postmark Jan 15), thread (lots of ends) and weave one baby blanket, wet-finish that and another and post the two, and do my tax returns, (2 days work stretched into weeks and weeks of agony time permitting.)  And come up with interesting "packages" of inspiration for Mom and her students.

Meaning, I better go and work on these things pronto. But, oh, what a dry post without a picture. So here's my "garlic" flower. I think it's green onion, or even brown, but I can't remember planting anything but cloves from half a dozen bulbs of garlic and one shallot. I did have brown onion a few weeks ago. It's about as tall as me. 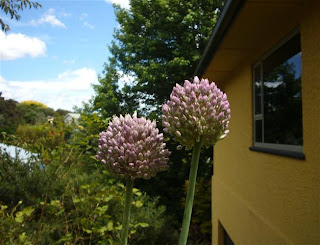 Books and magazines said I should dig up the garlic when the tips of the shoos start to turn brown, but some are too tiny, while some look ready. And, lo, there are brown onions and not shallots! That's what you get from hit-and-miss gardening, but I'm happy because this is the first year I got more than one shoot of garlic from several bulbs. I think I'll keep some still in the ground, though. 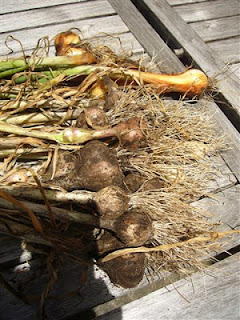