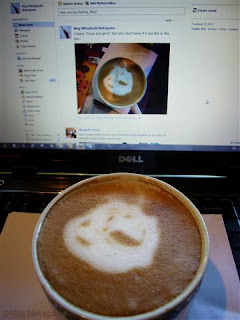 I've been trying to get excited about photography again but it's not working. 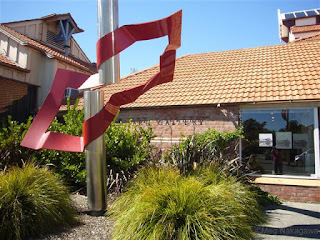 In my overzealous cleanup of photos Friday, I deleted the one of The Suter on my Outlets/Contact page, so we went there yesterday only to find the shrub in front is a bit overgrown and from no angle could I see the word, "Suter". Maybe later this week.

I know sketchbook doodling is a great exercise and a potential hobby, but I don't get too excited about it because my drawing is only ever so so, unlike Ronette's class it's only A3 or A4 size, and I can't use my fav felt tip pens because the papers are so cheap. And I've been on the lookout for better ones but precisely because my drawing is only so so, I've been reluctant to buy anything but the cheapest or the most standard.

Then I saw Catherine telling me you've really got to like the one you draw in. So I went to a couple of places in town but I haven't really seen one I think I can draw on with felt tip pens. Maybe I'll make one, or maybe I'll look for some in Japan. I love the idea of having beautiful sketchbooks. But if I find one, I'll have to improve my drawing, too.

Catherine spoke of the time we gesso'ed smaller pieces of paper for class in 2010 and I used a lot of fabric scraps. I had considered mixing my textiles with my drawing, and had earlier decided against it, but she revisited the possibilities, and I ended up reading a little bit about gesso. Did you know that I could spray-paint gesso onto wool cloth and Ph-wise it won't harm the wool? 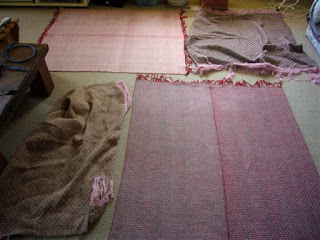 The Toddler Blanket came off the loom last night and today our place looks like a sweatshop. Two Hearts pieces were finally washed and pressed this morning and now needs drying and clipping the fringe ends. The white one, (top left) will go to the same wee girl whose first blanket was put into the clothes dryer by an au pair. The proper commission blanket, (top right) must now rest for a couple of days before fringing, washing, etc. This is for Hearts Blanket's wee baby sister.

The gray Hearts is the one where I deliberately put two faces on the two sides after I did that by mistake in the first commission piece. I can't decide if I want to keep this or sell this from Refinery, but I know this and the Refinery is a good match. My short, gold one (bottom left) is ready to be fringed, but Ben's not too keen on having it live in our car for emergency picnics. Because it's pink!

Mom's been too generous with her students she's in a pickle. The 8-shaft she bought last year, without having had the time to give it a good go, has been taken over by one of them. Mom She has two RH, another 2-shaft, two 4-shafts, (one a floor counterbalance, another a table loom that irritatingly "resets" every shed,) and the new 8-shaft but having taught twills, and especially diamond twills, all three students want to do those. At once. So Mom hasn't had a loom of her own for a while again. Her own fault, but Ben started looking for used ones online. Because Mom's fav was the giant Glimakra 8-shaft counterbalance, she wants something more stable than any of the looms she now has, but budget is tight, as is space, and multishaft floor looms in Japan isn't exactly in abundance, so things aren't looking exactly rosy at the moment, but we'll have to find a remedy soon. I'm thinking a solid table loom would probably be better than a floor, but we'll see.

(There seems to be a big gap between the quality of amateur/hobby looms and those intended for "professional"; there's a big gap in the prices, totally different dealers sell them, and the "professional" grade seems to have fewer shafts, but I could be wrong on the last count.)

Found some interesting finds while looking for a loom for Mom:

A miniature Japanese loom on which you can actually weave - it comes with a stick shuttle! Click on the line below the photo to see three views.

Antique bamboo reeds, 20 of them, in a box on auction. I'm so tempted but it's from an antique shop and they state not all may function.

And Tokyo Agriculture and Technical University has a museum full of models of regional looms as well as some real ones. I would like to go there next month.
Posted by Meg at 1/21/2013 04:15:00 PM