Goodness me, Ben lost so much weight he's got his wedding ring on!

Though my mom would vehemently deny it, she is a good cook. She always had a solid repertoire of kid-friendly dishes and almost everything tasted wonderful. As a kid, I never went to friends' place and thought anything tasted better than Mom's. She was always, and still is a killer fryer, too, and Ben and I are critical when we go to Tempura or Tonkatsu restaurants in Japan, and a few Fish and Chips places fail here.

Mom wasn't so into trying new dishes out of cookbooks, magazines or telly programs, but she was into health and organics since the start of the 70's and she certainly tried new ingredients. Hence the "almost" everything: I remember a particularly stiff bread made with organic brown flour. Though my sister and brother just put up with it, I grew to love brown rice and brown rice Omochi so Mom still tries to get them when I go home.

She hated thinking of what to cook, though, and at around 4PM she jokingly complained why we insisted on eating dinner every single night. While we would have been thrilled to be on a rotation of Hamburgs, (meat patties with veggie sides, no buns,) omelets, Tonkatsu, Japanese style curry and perhaps chargrilled horse mackerel, she never compromised and we got freshly cooked meals every night. My sister learned to cook by helping at Mom's side; I usually studied before dinner; guess which worked better in the long run?

Mom loved to cook beans. And she cooked a lot at once. And it appeared only she loved eating beans after Day 1. Came Day 3, she'd start worrying about the beans going bad and we had to have eight or ten beans with every meal, individually rationed in delicate Japanese dishes, and no matter how early I got up, (and from about Age 13 onwards I was often the first to get up,) somehow the mysterious Bean Ration would appear on the table! Of course when we were done with one lot, she would cook the next with gusto.

Among the benefits of trying to live more healthily has been learning how to make Hummus. My friend Trish told us a decade ago it's dead easy, but Trish being among my Super Cook friends, I didn't look up recipes until a few weeks ago. And it is dead easy and even I can do it.

I've reached that dangerous point where now I just wing it without consulting recipes but relying on taste, and I use as much garlic as I can be bothered to peel, (a lot,)  and substantially less oil and salt but that's a sensitive area because salt does make things tastier, and oil does make them creamier. We now have a constant supply of hummus, but Ben doesn't touch them much. Boo hoo. 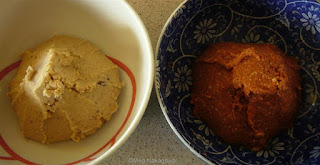 This week I made one with roasted-slightly-burned pine nuts, and another with roasted red pepper and walnuts. The amount of bean-cooking water is another potential mystery to me; on Day 1 the white one was a tad too stiff, the red a tad too runny; now the white one is stiff but the red one is OK having expelled the extra water, it appears. They could both use a bit more oil. This batch, I also cooked the beans a little too long, (I put the timer on and went downstairs to weave!) so they are not as crunchy/textured as Ben like. I may have to start making His and Her Hummus separately in the future.

Ben thinks I make too much hummus at once. But I don't ration them.

This is a post from my friend Catherine's blog: 14 Reasons to Paint your Self-Portrait. I don't know about "1... (the model is) prepared to sit for as long as it takes," but if you like to draw the same model over months and years as I do, self-portraits can be addictive. Though for me it comes and goes; love it sometimes, loathe it at others. 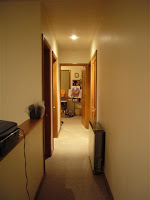 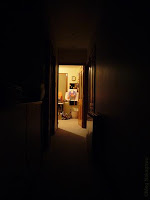 The "clueless" drawing at the end of the hallway, as seen from the entrance of the living room. Just like having cones sit on the railing for weeks and months, the "looking" helps to endear me to my drawing, but so far hasn't helped me in knowing how it should be "finished".
Posted by Meg at 1/19/2013 01:36:00 PM