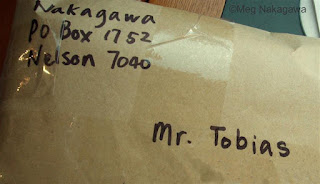 It goes like this. The family has four precious ones: W, H, J and D, and grandma has commissioned a blanket for all of them. Except a silly au pair washed J's in the washing machine and then stuck it into the dryer. So J has not had one for herself for most of the blanket's tenure, but her Dolly has.

As you know I just happened to have woven two more from this J's warp because I liked the draft, so J got her own, (the white one, with one face on each side,) and D hers yesterday. Mummy called Grandma and Grandma called me to tell me they arrived safely. Grandma also offered to pay for J's second one, but I declined; no child should have to suffer from an au pair's, (oh, what's the word,) unfamiliarity with wool, even though clear instructions were written and taped in the laundry room, from what I understand.

W was a bit sad J now has one for Dolly and one for herself; being the eldest, W takes care of small ones, including Tobias, his doll Grandma bought him when H was born. Well, second time lucky for Grandma, it just so happens I have a small piece I made from W's warp end, which sat on my chair in the basement since, well, I made W's blanket. (I was pretty sure the chair and the piece would have made an appearance on Unravelling several times, but I couldn't find it in Picasa...) Anyway, it's a little flat on account of my unsmall having sat on it from time to time, but Grandma said it didn't matter. so the little warp end piece left Nelson today to meet W and Tobias.

I finished my tax returns today. As as is customary, I proceeded to resolve to work on it more frequently so I don't have to feel overwhelmed and have a big annual Drama Queen week. But failing that, I decided that from the next return I will either try to get it done in the winter months, or failing that, I will work on it in the mornings and dither in the afternoons if I again find myself filing in panic in the dead of the summer.

Today and tomorrow we are supposed to have a heat wave, and not just a Meg Complains kind of a heat wave but a proper one; part of the North Island and the southern part of the South Island have recorded record highs, but to me Nelson felt cooler today than yesterday. At least we had breeze. They were predicting highs of nearly 40C in parts of the North Island, but I'm not sure if anyone got up there. We are having droughts all over, too, and bush fires, and in one instance the military used grenades in training amidst total fire ban in the whole district.

Still, ours is nothing like Australia. And so far, we haven't had floods in a while.

Feb is the coldest month of the year in Yokohama and also the exam season, but for some reason I don't remember it having been hard on me, except the start of the hay fever.