We Return to Normal Broadcast

Ben went back to work yesterday after a three-week break. We didn't do much on account of Ben's tennis elbow, (cleared by the physiotherapist yesterday), concentrating on our diet, (on-going), and my twisted-bruised-but-not-broken ankle, (98% good.) The ankle was an annoying one; I could walk on it right after I twisted it, but the foot was so swollen I couldn't fit it into a shoe or sandal for two weeks. At the drawing class Saturday I warned Ronette that a shoe might come off, but I managed to keep it on.

We changed our diet and portions surprisingly painlessly over the three weeks, and feel pleased with ourselves. In fact, reducing the portions was so easy we continue to be surprised how little food we ate over three weeks without feeling hungry. And there were always fruits or tomatoes in the bowl. Ben exercised regularly and new pairs of pants he got in late November now look too big. And his blood sugar level is back to not exactly where it was a year ago, but slightly better!

I often "dilute" my cooking with relatively undetectable ingredients. For example, I use large amounts of eggplants and zucchinis in meatloaves and pasta dishes, oatmeal instead of flour, and chopped up leaves (cabbages are best) in stews, soups and sauces. I also started keeping in the fridge this soy bean concoction, (soak, cook with maybe a cabbage leaf, and blitz with some of the liquid,) which works surprisingly well where I would have wanted butter and flour or cream before. Using more produce tastes better, but has also reduced our starch intake. Ben started playing around with his own new tricks in a similar vein, and our meals don't feel so heavy. And as a nice surprise, we're using so much less dish detergent with reduced use of fats.

We use a lot of vinegar, but this year with the bumper crop of plums, I've put plums in just about everything instead: salads, pork and chicken dishes, even in our sorbet and shakes for an intense sweet-and-sour kick. And I made a lot of "sorbet" - in quotes because I only cut up plums, add other cut fruits or berries, add lemon, lime or orange juice if there is not enough liquid, blitz with a stick mixer, freeze, and mix once or twice if necessary. This is how I survived the heatwave. No sugar, but once I added a little bit of honey, and that gave a wonderful aroma.

I'm a little worried about keeping up this way of eating now that we are back to normal life. I worry Ben will slip into rushed-sandwich-no-exercise routine; already he is not on his machine as much. But the amount of weight and fat he lost must boost his energy level, (he's so laid back I can't tell from the outside,) and I'm hoping it is going to keep him moving. Me, I started exercising until the ankle incident, and am slightly afraid to get back into the routine. I have, though, been doing a lot of housework since the weekend and mixing it up with extra going up/down the stairs and some arm stuff.

I also worry about our eating with the change of the season. We have wonderful fresh produce until around Easter, and then the air starts to cool down, and we start to think about comforting soups and stews and that's when our resolve will be tested.

In case you wonder, Ben still cooks with bacon; that and bonito flakes are his stock bases, but he uses much less and uses a wider variety of veggies and herbs and spices. (He's big on hot spices.) I'm also experimenting with vegetable stock and hope to make my own garam masala and curry paste. We haven't tried to reduce our animal protein, but it has gone down because we don't crave it. But not milk, nor cheese. We have consciously reduced starch and simple grains with portion control, but with added veggies, we haven't felt hungry. We have stopped late night ice cream completely, though, because the fresh fruits have been so fabulous this season. I need to start thinking of winter alternatives, but at this rate, we may not need any.

The magazine I subscribe to have been on the same wavelength as me; they had feature articles on food and supplements, (I quit them some years ago,) two weeks in a row. 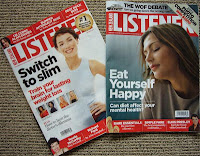 Four weeks from yesterday I shall get on a plane and go home for six weeks. I've started getting more serious about what needs doing before I go. Yesterday I finished my Sketchbook Project sketchbook, (so unexciting I couldn't even bring myself to photograph,) threaded enough of the pink baby blanket so I can finish it this morning and start sampling, and put all my "to do" pieces of papers on the desk to be prioritized this afternoon. I still have to do my tax returns, but with four weeks to go, I can also weave or tidy the garden or tackle super simple sewing projects waiting on the couch.

This happens often; once summer comes and everybody's garden looks fabulous and veggies and fruits growing and our place looks like weedland, I start to look forward to what I hope to do to in the coming autumn/winter. This year I'm almost giddy became I don't have a big projects in the winter, and I've amassed plants, fertilizer and seeds which were supposed to go in this spring when I was defeated by hay fever.

What else was in my oath? Italian: it's been more like ever three or four days rather than every day, but I have not walked away from it, and surprising myself with what I remember from the course in 1995. Yesterday was the days of the week. Today, I think I shall do the months. No progress with Shakespeare; that book is too too heavy.

Annabelle has an easel in her living room where she puts the latest drawing of interest and considers if more work would improve the piece. I have an easel but have never put it up because my house is already filled with my weaving stuff and I guess I've never done serious drawing at home. I had my purple music/weaving-draft stand in my stash room up for some time, and this week I have the pieces I did on Saturday just inside the door so I can see it from the living room and the hallway. This is an interesting process; I can't think of what I can do to improve it, but my drawings collectively, for the first time, have become not just a throwaway play things but something to continue thinking about.

We've had tremendous rain in the last 24 hours. I love rain, but at this rate parts of Nelson and all over the country may flood again. Which is not a bad thing in part of Canterbury where there've been scrub fires.  But nothing like Australia. Goodness, in Australia, areas about the size of the greater Auckland Region (approx 5000 sq km?) has already burned. I wished we could send even just a wee bit of this rain westward.
Posted by Meg at 1/15/2013 11:10:00 AM