Converting a 14-Shaft Draft to 8

A while ago, I wove few of what I call "Donat's Diamonds" from Kris Bruland's Handweaving.net; these are draft numbers 27454-27473, and I wove them turned on 14 shafts straight draw.

I'd forgotten that one of the things I did was to weave with undyed merino warp and undyed merino/mohair weft, and left it in a dye bath as an experiment, and gave it to my mother. This was before digital cameras, and I can't remember much else.

So, bless her, she wants the draft years (?) later, and can I please send it to her, but no hurry, dear, anytime you get around to it. It took a few trips down dusty archived folders lane on another computer before I figured it was maybe, probably, hopefully, Draft 27463. Except it's in 14 shafts, and the most shafts she has is eight on a table loom. So the dutiful daughter that I am, I set out to try to replicate the mood of the draft on 8 shafts, something I've done for the first time. And boy, is this difficult!!

This is the original draft, turned, and converted to a lift plan. 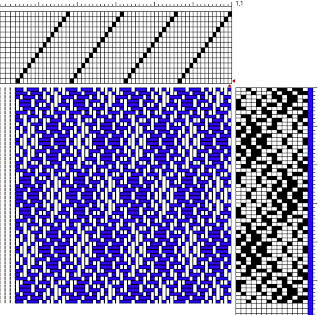 My first method was to try to create a draft as close to the original as possible in a tie-up mode. I didn't like that the diamonds were so squashed, but experimenting with only 10 or 12 treadles, I felt I was stuck with them. The diamonds are pretty flat in the original draft, but but that didn't help. 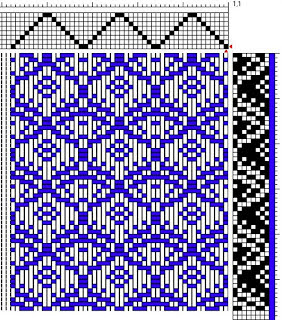 So I studied the lift plan of the original, and started to make elongated diamonds. After a while I was doodling in the lift plan as usual, and half a dozen drafts later, I got this. 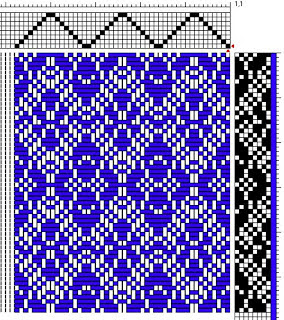 This is too lacy and not diamond-shaped, but does convey the atmosphere of some of the other drafts in the series, so I decided to send this to her. Some of the earlier, simpler drafts might have been closer to the original, but I didn't like any. I haven't found the trick to capturing the mood of a draft.

I think I can do better. Since this request had sat on my desk for two months, I decided to send these to her for now. Mom is capable of working out drafts herself, so I hope she will try something as well, she does have a computer, and I would like to revisit this another day so I can send her something better.