Today was a beautiful day, the first day of spring, a perfect gardening day, and even I thought of venturing outside, but I've been feeling a little oozy from the antibiotics, so I stayed inside and worked on the website some more. (Oh, the tooth; it now transpires it could be a wisdom tooth, which I thought I'd had extracted decades ago! I was told sometimes a course or two of antibiotics can make the problem go away without extracting the tooth. I'm all for ooziness in that case!)

I went looking for nice photos for the website; most of the ones I liked were from 2007; I was equally enthusiastic about weaving and photography, and the house was tidier and, I hesitate to say, I had a wee bit less stash. I had some terrific pieces, if I may say so, as well as terrific pics of rather sad pieces. And some of the pieces I thought were poorly designed turned out to be not so bad; I might go into Red to make myself reacquainted with them. 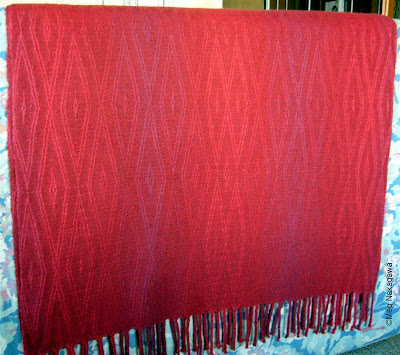 (Not the pic, but the series of three of these.)
Lately I am interested in designing and getting a piece done, and everything I do is finished just in the nick of time (or later), I don't have many good pics of any of the pieces I've woven this year. The yellow pic a couple of posts ago is the one of the very few I like, so it's popping up all over the place. Must try harder!

However, I had taken some strategically out-of-focus pictures specifically for the website, (and things like business cards, brochures, posters, should I need them), and some of these finally got to see daylight. (The berry-colored banner at the top of this blog is one of them.)

I had planned to completely revamp and rewrite the web site, but whether I tried to edit the old version, or started typing on a blank screen, I ended up with pretty much the same thing. Likewise I shuffled the contents around a little to make it more interesting, but the sections more or less fell back into familiar positions. So I concluded Ben and I gave it enough thought at the start, and Martin Rodgers gave me very good advice soon afterwards, that I decided not to tamper with those sections too much.

It's mostly the gallery part that I hope to update often, and possibly add an exhibition section, but that will be in the next phase. It's a good thing I'm finally far more interested in weaving than in marketing, (took me eight years to get here), but I should keep working on the "business"side, too, incrementally.

So here's an idea: the next time you feel a piece didn't work well, stick it in the back of your closet and pull it out six months from now. I swear, you'll see lots of good things about it; from that distance, you can be more objective about your work. OR, if you have a digital camera or video, take deliberately blurred, "moody" shots; you could make good use of it another time.
Posted by Meg at 8/27/2008 05:36:00 PM