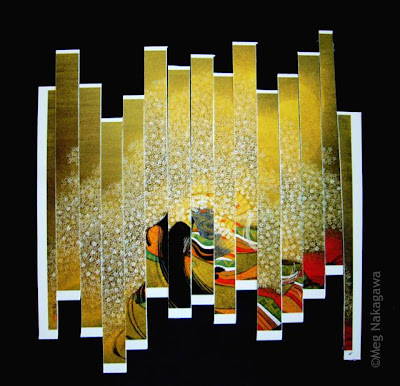 While working on the collages this week, I had Akira Kurosawa's "Dreams" playing off and on the telly. It's not so much a movie as it is an eight-part visual essay, stunning-looking, but no coherent story. Imagine, if you will, a visual version of a short story collection, and you'd be right.

I was astonished how familiar it felt: I did not grow up in the country (i.e. I lived in the city,) I was born a later than when most of the stories take place, and yet I so got it. The sentiments, the symbolism, death, the survival guilt from The Pacific War (WWII), the exaggerated line delivery, the Kabuki-style acting. I don't necessarily like them all of them, but I so got it, far more than modern Japanese films and TV shows. And I cannot put into words how relieved I felt to see something so familiar; that that sort of a world still existed in the mind of someone else, because the physical word didn't survive. Never mind Kurosawa was 80 when he made it, or that it was released 20 years ago. I loved it, and I soaked it in. You could say I didn't listen to it with my ears nor saw it with my eyes, but the film seeped into me through my pours. And I've never, ever experienced this with a Japanese film.

I bought this DVD while I was in Japan because this museum in Asakusa had a room with his drawings, a costume used in this film, and some photos, in one room. (And you haven't heard anything about that museum because I haven't gotten that far in tidying my Japan pics. It's where India Flint visited the day before Mom and I.)

Which leads to my problem of being Japanese, and a weaver, but not a "Japanese weaver". I learned to weave in New Zealand. I don't know much about Japanese textiles or the kimono tradition, except there was much around me when I grew up. I can't be held responsible for explaining techniques and processes and regional characteristics and history, because I don't know. And yet, every time someone mentions in passing that something I did looks Japanese, I cringe, because I feel like an impostor. And that's been my biggest block in signing up for the Wada workshop; I don't want to embarrass myself, and I don't want to be found out. But I think this year is a year of learning, and thank goodness to my aging father who still funds my education, I think I might go.

And a full circle. The said museum in Asakusa, Amuse Museum is exhibiting "Boro" and Wada is writing/has written a book that involves Tanaka Chuzaburoh's collection, which this Amuse houses.

I might as well bite the bullet. As Anna said, I will never not be Japanese, so until I invent a word that means "born/schooled in Japan, further schooled in Minneapolis, and having lived and changed life in Nelson", I am what I am.

I got three books on art/contemporary textiles of Japan. Many are outrageous and... ahem... some are ugly, and Changing Threads might love it but they're so not me. Some are huge and I can't think in that scale. There are a few lovely, beautiful things, and I could really go in those directions, but they wouldn't be considered "textile art" in New Zealand.

By the way, we've seen many of these or similar works, sometimes with different names and countries attached, in FiberArts magazine. So not all are unique to Japan or come from Japanese aesthetics, plus I wouldn't be surprised if there are more chances to exhibit textile art in the West so Japanese artists send them overseas.

It seems to me to boil down to this: Japanese are obsessed with textiles, most people, most of the time, and they, all kinds of textiles, are everywhere. But the same could be said of ceramics.
Posted by Meg at 3/27/2010 09:00:00 AM