Yeah, one whole day of it, including half an hour of standing in front of a pot of boiling water. 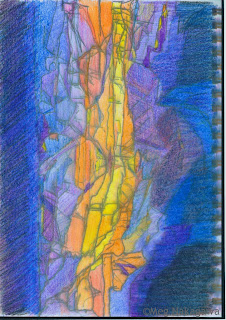 First attempt: I tried to use the Canoe photo colors the best I could with the water color pencils I had.  This one still maintains a lot of the shapes I see in the photo.  It almost looks like a floating island in the sky, and either side can be the top. 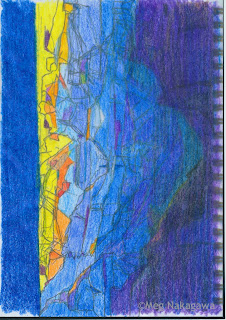 Then I tried to use the proportion of colors as close to the Canoe photo as I could remember.  In retrospect, the original photo has more browns, but I didn't remember that at the time. Because of the values, different parts of the canyon is seen clearly. 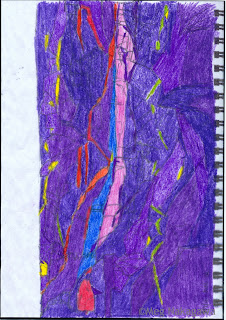 I had enough of the orange and indigo combination, so I tried something else altogether; I imagined I was using my 2/20 cottons and used colors I might want to use in a scarf.  I can still see the Grand Canyon contours I've come to know well. 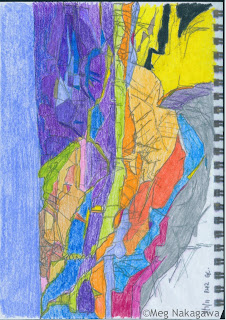 This is the last and only "anything goes" version.  I also used regular color pencils in addition to water color pencils. It's a mess and the areas I like the most are the analogous areas. 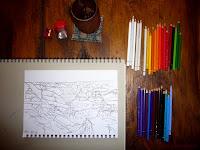 Today was more a waste of time than rewqrding. I'm allowed to say that, yes?  I think doing many versions, (I aim for half a dozen to a dozen of most experiments,) is not always the right way to go. I was bored and tired after the second sheet, and by the fourth version, I couldn't even see the delicate differences in the purples.

I never enjoyed coloring as a kid, plus it took about an hour for each of these.  And then I remembered that originally I was going to print the contours on drawing or water color papers, but I forgot and printed them on regular cartridge paper, so there was a limit to what I could do.

I used water color pencils because I have a hard time mixing paint to get colors I'm after, but then I remembered I also have a hard time wetting water color pencil marks. In the past I've tried brushes, paper towel, sea sponge, and fingers, but regardless the pigments seem to collect in one area leaving the rest pale and watery. Today, I tried steaming from the wrong side, then the right, but after 25 minutes at the stove, I saw an ever so slight hint of change on the surface. Then I stumbled upon my broken plant mister, so that's what I used, over and over and over again. That was a good stress relief.


I'm not sure if I learned anything from the day's experiments.  Other than water color pencils still being a difficult medium to use if I want saturated color areas.  And that Grand Canyon upside down looks a little like a mountainous island.
Posted by Meg at 7/13/2011 10:30:00 PM