*** This is a long, wordy post, and you have read most of my thoughts in different posts over the last two and a half years. You've been warned. ***

I spoke with a fiber artist, who was sad she was not invited to join The Group.  She's active, successful, (she's won big prizes in the last few years,) and has good connections, (including knowing all of us.)  If you look at the names in our group, it's strange see hers omitted, and even stranger to see mine included, but more on this later.

I met her 11 years ago, but it's only recently I discovered she weaves, too, and I've never had a meaningful conversation until very recently. To me, she's been a blur of colors waving, hello-ing, and promising to get together sometime soon. I probably know her work better than her person. So, I've been trying to remember why she wasn't included.

In 2008, Lloyd of Arts Council Nelson told me there will be a new textile award show; later that year, I got the brief for the very first Changing Threads, in which I discovered to my dismay weaving had been reduced to a mere traditional technique. When the show opened, in March 2009 from memory, I was furious because a lot of stuff in the exhibition had nothing to do with concepts, repeatedly requested in the brief.  And that's when I assembled the Textile Lunch group.  I figured these ex-art-teachers, gallery staff, and art historian can tell me what concepts are all about, and how I can weave them into my work.  When I started the Lunches, I had in mind gradually expanding the group, to include the artist in question among others.  But the lunches dwindled and eventually met its natural demise, so in December 2010, I planned a party to officially thank fellow Lunchers.

Meanwhile, around March 2010, I helped hang the second Changing Threads and I was beside myself because only a tiny fraction of the selection met the brief. This is when I resolved to hold an exhibition of unadulterated, unenhanced handwoven stuff; the title "What You See is What You Get" was meant as an in-your-face rebuttal to the pretension that was Changing Threads.

The gathering was planned for January 2011, and I kept inviting more and more textile women. I thought I had explained in my invite the gathering was to lament/celebrate the demise of the Lunchers, but some understood it to mean I was starting a new group.  This far removed, I can't remember if that was my intention on the occasion, but I won't deny I'm always interested in a forward-looking gathering. The day arrived but that morning I discovered that among the 15-20 invited, only Jo and Pat and one other could come.  So the evening gathering was canceled.

Jo, Pat and I met later with the express purpose of considering starting a group.  I was looking for a study group because I can't work with others, and I didn't want to.  After a lengthy discussion, we agreed a group working towards a joint exhibition might work best: we would have deadlines, a platform to show what we've learned, and a purpose for learning and helping each other solve problems. We weren't aiming to learn a specific technique together, (unless it just happened that way,) we weren't aiming to collectively, (unless some people wanted to work that way,) but we would support and encourage each other and create an environment where we could stimulate each other's making.

The three of us were to nominate one person each to invite to the group.   Said artist's name came up, too, but she is known to be always in a rush, and already we sensed our group was going to spend a lot of time discussing things to our hearts' content, working slowly and carefully, to build something special, and she might introduce a different way of participating. Nobody ever proposed to omit her; nobody ever thought her work wasn't "up to scratch" for where we were aiming.  At some point, Jo and Pat came up with three must-have names; they have a many friends in common, especially in the eco dye circle, and she would have been among them.  By then, I was desperate to nominate a non-eco-dye person.

It turned out my nominee doesn't join groups, so the group started with the six members, five belonging in varying degrees to the eco dye circle; one being Ronnie, the author of the Changing Threads brief and my symbolic nemesis; me being the only one, besides Ronnie the organizer, who never submitted work in Changing Threads, let alone win big prizes.  At our first meeting, I told the background of how and why I came to sit among them, and repeated several times I didn't want to join a group whose only concern was conceptual work.  We never asked Ronnie, Maria or Judy if they wanted to invite anyone else, but I think we agreed six was about the right number.

As you know the group has worked surprisingly well thus far, and though we come from very diverse backgrounds, I think there is a lot of unspoken but common understanding on how and where we want to go.  Someone from outside Nelson wanted to join, and it was easy to decline the request on the basis we are new and we want to find out if we can work together.  We want to stay with the original six until we have our first exhibition. Then we might consider other members, a two-tier system, or something else entirely.  Things seem to progress organically in this group; decisions are made quickly or slowly, but it appears so easy to get general consensus.  The dynamic is fun to watch.

Because I invited everybody to my house first, because I gave up my spot at the Refinery, I understand it's sometimes described as my group, but when we meet, no one member has more say over others, and it feels as if The Group has a life of its own.  That's also fun to watch.

I felt so sad for the artist, my friend, that she felt she's been excluded.  And in the last few months as I've gotten to know her better, I know she doesn't deserves this hurt.

But now that I've reminded myself of how The Group came to be, I'm glad she's not among us.  On average, the group meets between four to five hours at a time, discussing the nuances of each word we might use, and we thoroughly enjoy the discourse.  I'm enjoying the slow and deliberate progress and the sharing of view points and feelings.  I can imagine she might find it all a waste of time, and her busy-ness would have been distracting to the rest of us.

I wasn't sure whether I should post this, but I needed to write it down to understand how it happened.  And now I know, I don't need to apologize for the way things happened, and I don't need to make excuses.  But I hope it will help lessen my feeling of guilt a bit.

I thought to email her this "information", then to write her a letter, but I think I'll get together for coffee and cake when she can spare me some time.  I'll have my time line handy, but will refer to it only if it seems appropriate; that's the least imposing way I can think of.  I don't want to shove words down her throat.

And if you ever felt you've been excluded from something, or if you've been thinking of starting or joining a group, keep this somewhere at the back of your mind: sometimes things happen organically, without malice, without intentions, and that's really all there is to it.  Trust me, because I would never have believed it had I not found myself on this side of the story, and I'm the biggest conspiracy theorist there is. 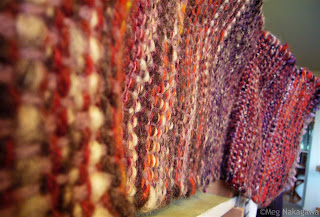