After a longish meeting on Monday, and helping to pack up Red almost all day Tuesday - Friday, I realized this was the first time in a long while I went into town for most of the day for the entire working week.  I remembered how bad I was at living, outside of work, when I worked. I couldn't think of much else, and I was a tired zombie when I came home.  As I was this week.  That is how I work.  Even on days Jay brought me home in the late afternoons, laundry was about the only thing I could manage.  That, and hours and hours of computer games and TV.

I'm grateful to Ben to allow me not to work and weave instead; it is my "work", my life, but it's also a big indulgence.

On Friday I was asked if I wanted to buy a weaving business; it is a one-weaver business weaving yardage and then having them  sewn into garments sold at souvenir/crafts shops targeting overseas tourist. It was the easiest "No" I ever said, even though in the past I always asked if I could sleep om weaving/art-related proposals. It's not even about the money.  I congratulate this weaver for, like Sue,  having made a successful business out of handweaving, but I couldn't fathom weaving the same 2/2 twill yardage day in and day out.

And I can do this because Ben lets me.  "Lets me" is a strange way to describe it, but that's the only way I can describe it now.

I slept in this morning, and as I expected, I had a hard time slotting back into a weaver's life.  I knew the only way to get back into the swing of things was to get on the loom, so I wove that strange experimental thing, and that was the end of the red warp put on in March. The loom and the surrounds needs serious vacuuming, but I am looking forward to the next project. 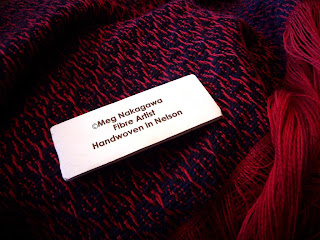