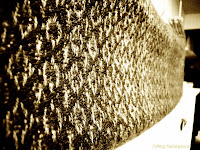 It's not that I've been avoiding, or been reluctant, to work on my P2P2 project.  But a series of "I don't know where I'm going with it" attempts has left me in a limbo; I've some experimental stuff dotted around the house, but in my mind there is no connection between these and the images, and to be honest, I feel no connection with the experimental stuff. So, a reminder; here are the photos I received. 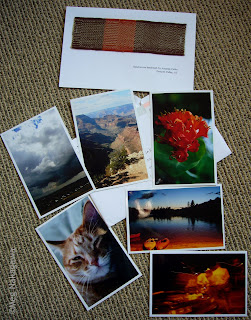 Finally, last night, I got out the pictures and sketchbook.  Again, I wasn't sure where I was going, but I started out with quick blind contour drawings.  In Ronette's class, we sometimes do blind contours, which must be drawn slowly and accurately; we also do quick gesture drawings, but what I did yesterday was a strange variation, mainly because I didn't have the patience to do a slow contour, and I wasn't sure if contours were what I wanted.

Here's an example - bits and pieces from five of the photos. (Sorry the photos in this post are strange; my living room is not that dark, but captured on camera, they lack contrast and I couldn't show you the squiggly lines without much cosmetic interference.) 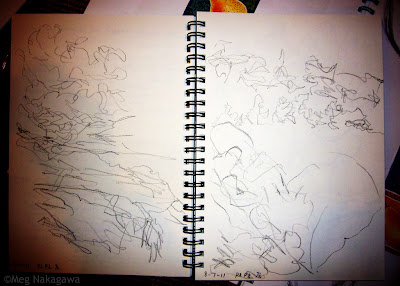 After a few of these, drawn mostly with my left hand, (I'm right-handed,) I realized my "blind quick contours" allowed me to "look" mostly at lines in the images with my hand rather than my eyes. So I did two more quickly but with slightly more details: using gold, silver and bronze pens, I drew lines I saw in the Grand Canyon and Monsoon Clouds images, in three separate attempts. I didn't look at the drawing as I drew so I didn't worry the contours didn't overlap.  (I found the Monsoon Clouds harder, so I turned the photo upside down.) 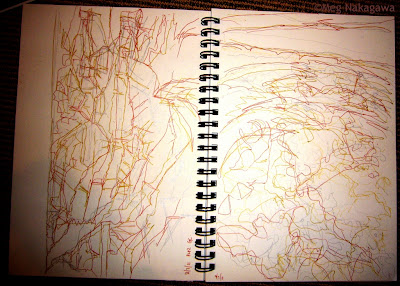 What I did discover is, with Grand Canyon, I am most interested in the lines, both of ridge lines and stratification. I also see the same shapes repeated in the majestic rocks sticking out of the flat ground on the side of Arizona freeways.  But with Monsoon Clouds, it is the overlapping shapes I'm most interested in. I thought I should tear paper and collage them to understand the shapes better, but I find working with glue excruciatingly messy, (even with stick glues,) so I tried tonal drawings using the side of a conte.  It didn't work too well.

While drawing, I also discovered I liked the shape of shades of trees and mountains in the Canoe image, but did you know, asymmetry is what makes it interesting? Have a look. 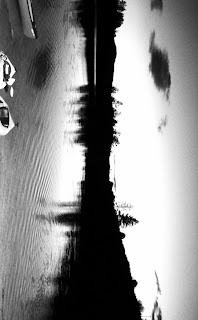 This is the original photo.  The two sides are slightly different. 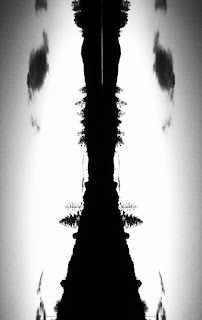 This shows the sky half repeated in symmetry.

This shows the water side made symmetrical. I think true symmetry has a clinical look, which would suit in some case, but in this instance I think the slight difference in the two sides create space to take a breath, a softness, a reflection of nature more than style.  Do you know what I mean?

The Evening-at-a-Parking-Lot photo, I wasn't sure what to do in terms of lines and shapes, so I turned it clockwise several times, and saw a contour.  It could be a feminine body, or a landscape.

Oh, one last thing, because the photos traveled inside a card with staples, the right side of the Parking lot picture has indentations in the dark part.  (I tried photographing it, but I was nowhere near capturingt.) That texture is very... textural and attractive.  It's only glossy photo surface marked by a staple, but funny what you notice when you keep looking at a set of photos day in and day out. 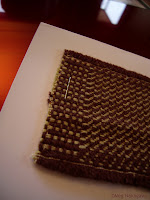