The Weaver is In

I got tired of being a weaver who thinks, writes and talks about weaving more often than she weaves, so I got on to it this morning: I started on the two Log Cabin warps I made back in March!  Below is a strange picture, though, because this piece is made up of two dark teals and two navies, but the bigger problem was, no matter which light I turned on/off, or from what angle I looked, I couldn't see the squares and the rectangles, until much later in the afternoon when the sunlight came in from low angle.  And then, I could sort of see the shapes; the vertical lines are easier, but the horizontal, I could just be imagining...

I love navy blues, from almost purples on one end to indigo on the other.  In Japan, and many other places I've visited like Hawaii and Tonga, the sea is navy blue of different values, almost black blue before a storm.  Around New Zealand, the sea is greener, more like dark blue teal in the winter, blue on very cold days; but in the summer it turns a very milky white teal.  I'm told it has to do with the number/amount of algae.

I feel silly describing the teal-colored sea when the picture I've got is a sad-looking gray piece in progress.  The teal in the linked photo also looks desaturated.  I'm going to have to do something about this. 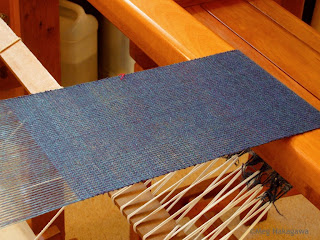