Heard on Radio New Zealand's "Nights" program: a brief opener on the arts/craft discussion. It's inoffensive, whichever side of the fence you sit/stand/sleep on. Scroll down to Arts/Visual Arts, at 20:40.  Here and here are a couple of the exhibitions they referred to. (And yes, in a country where the two main islands are called "North" and "South", our public broadcaster has programs such as "Nine to Noon", "Afternoons" and "Nights".  I love the simplicity.)

I have a friend in Japan who blogs about the hardship her family is having with her mother's mind deteriorating.  She writes a lot about what she reads on the matter, and yesterday she discussed doing physical things people used to do, that even if dementia (for want of a better term) is advanced, having them do physical activities they are used to improve their conditions or prevent further deterioration, albeit briefly. I knew about this, but I was surprised to read a calligraphy teacher, an occupation I hardly thought physical, being handed a brush, ink well, and paper, became lucid and instantly started acting professionally.

Kath calls it "muscle memory".  I notice I do a lot of things around my looms without thinking because my body knows, and more so on my two foot looms which I use more often than my table looms.  I definitely need to weave more so my muscles remember the motion; Kath promised if she finds me vacant and lost, she will sit me at my loom and hand me a shuttle.

When Kath came over for a cuppa yesterday, I had been working downstairs and so the basement was warmer and we sat in the basement together for the first time. I discovered my tiny "Big Loom Threading" chair had a pocket and a cup holder.  The pocket is under the seat, so not that accessible, but I can so use the cup holder.  I think I bought this chair about... 2008? 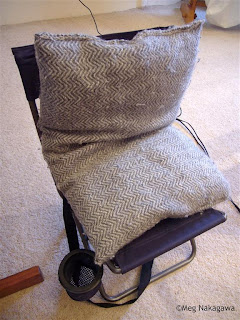 I've also been unravelling. No, really. Some years ago I read on Bonnie's blog that she and her Mom took apart cashmere sweaters, and I can't remember if she wove or knitted with them.  Anyway, I never had the heart to throw away two cashmere sweaters which were beyond the end of their lives; the gray one I really really liked, and the navy has such sentimental values.  I started trying to pick at the gray one a week ago without much success; had I more knowledge of the construction of commercial machine-knit garments, it might have been easier, but I stayed with it. 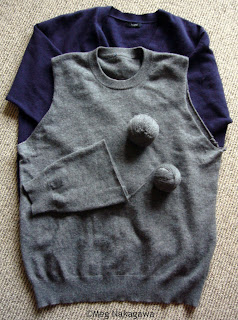 I see mending is big in quilt/stitching/sewing right now.  I don't see a connection between my recycling and that current conceptual trends, but I love the color and the texture of these sweaters, so it/they will be nice when I finally get around to making something for myself.
Posted by Meg at 7/29/2011 11:36:00 AM