Off and on I have lived in English-speaking environments for 52 years and still when folks ask me how I am I feel obliged to give the latest chapter and verse. But now that I'm growing older and grumpier, I've come up with the above as a default reply. I'm still trying it out with closest friends since I don't want to come across perpetually grumpy, or rude, but honestly, this is how I feel most days, And tired, for no good reason.

Last couple of week I woke up exhausted, some mornings almost unable to move, also a couple of sleepless nights, but I can't remember the correlation. One night I woke up with what I understand to be similar to an asthma attack; I've had this twice before during the height of the hay fever season. I rang to make a doctor's appointment at the start of the week, and I got one at the start of next week. (Happens a lot; NZ GPs are extremely busy, are yours? I could get an appointment with another doctor at my clinic in dire circumstances, but I need to see Dr Tom this time.)

And then I developed imaginary heart-related symptoms I learned about in high school because Dad's been threatening me that unless I loose weight I'll suffer from heart failure. Of course he is worried about me and is warning me so I don't suffer the same fate he has, but he's been slim all his life and for him being overweight is also a kind of moral decrepitude, almost a show of defiance on my part. The thought of the impending weight talk with Dad has weighed heavily, (ha ha!) on my mind these last few months.

I also found out the first Monday and Wednesday are holidays and Ben's work is closed on Tuesday so he's having a five-day weekend but I'm leaving at 6AM Monday and missing out time with him. (I knew about Wednesday but I thought he had this Monday off!) That makes me feels so sad. 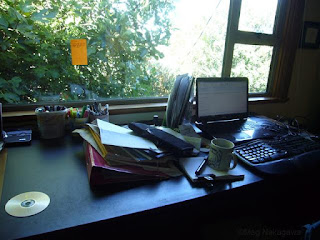 Symbolic of these last couple of weeks has been this pile of papers I couldn't being myself to sort through, but more on this later. I also took a Blizzard Check from a long-over-due catch up with Kath and had a Bowen Technique treatment to loosen me up.

Finishing the two Hearts blankets in the previous post was kind of... not good, either. I didn't like the wobbliness of both, at all, and I wondered why I wasn't improving as a weaver, especially technically. I started to feel "less good "than, say, 2006/7, (even though I know that at least my tensions are much better than back then.) I wondered if I'm destined to go downhill from here on.

Then I washed the latest Toddler blanket and felt a little better. This was the sixths double-width weave that I can remember, and it presented the least problem. Well, none. A big difference was, the other five, from memory, was woven with 2/17 wool (110/2 New Zealand size,) at 18EPI, whereas this was threaded 30EPI/10DPI, three ends treated as one and in the same heddle. Wefts in the past varied, but this was a particularly fat and airy knitting yarn.

It has a fabulously bumpy rustic texture, which is usually what I try not to create. The blanket is heavy and falls on you like a spoiled dog or a sleepy baby. And I tried braiding instead of twisting, which I think suited the piece. 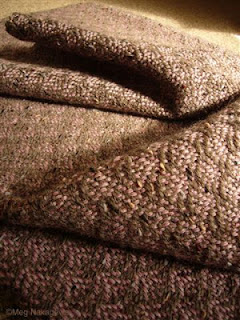 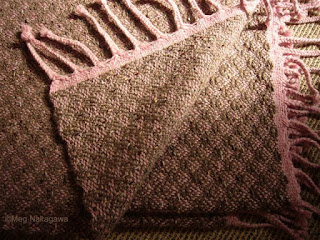 I had a lunch date with Pat on Friday. I was so tempted to cancel it and stay in bed but I made myself get up and get ready. The getting ready included: packing up two blankets to be posted, one blanket and one scarf to be delivered to galleries; go through the aforementioned pile of papers on my desk, which turned out to be a very small pile and took three minutes to go through and 20 more to take care of all but one task; and made a last minute shopping list of small gifts for home and errands. And a shower. In a couple of hours.

Pat and I had a nice lunch. I did most things on the list, and had time to look some more for a nice sketchbook. I may have found one but I was still unsure about the paper quality and felt tip pen so I didn't get it. I still had more than an hour left and the last item on my list was... ummm... bra-shopping. Which is difficult, not only because I'm short and fat and it was a hot afternoon and I felt sweaty, but in New Zealand, it's hard to find bras with large circumferences and small cup sizes. (Whereas in Japan, it's impossible to find bras with large circumferences.) So even though there was a good sale, I decided not worry about it until winter when at least I didn't feel so sweaty.

Off and on in my life I've kept a diary/journal in my life, but as my life, identity and Unravelling have merged I've found a separate diary redundant. I've been enjoying Jane's 30 Years Ago Today and have wanted to do something, though.

I tried a gratitude diary a few years ago, starting on Jan 1. Most days started with, "I'm grateful for having Ben, for being a weaver," followed by a few lame, not very reflective items like, "good strawberries". Occasionally Ben didn't appear. By about Jan 8, I only had the staple, somewhat obligatory starts. (I was busy that year as my sister's family was visiting that week.) By around Jan 14, I had a few, "See Wednesday," and the like, and I abandoned it when I had several consecutive days of, "Ditto."

While lunching with Pat, we discuses among other things good diet and exercise, and Pat casually said something like, "'should' are hard,' which led me to come up with the idea of keeping a "should have, could have, would have, wished had done" diary, totally not in a regretful, reprimanding way, but in a laughing-at-myself, not-taking-life-too-seriously self. I'd imagine exercise will feature a lot if I did this, but beyond that, not knowing what else crops up could be half the fun.

What do you think?

EDIT: There are people for whom it is extremely hard to lose weight by conventional measures. Although the primary reason I quit going to the gym, and a big one at that, was because the boom-boom of the music kept ringing in my head and deprived me of sleep, I also no longer wished to deal with the puzzlement and discomfort of gym staff at the monthly weigh in, because I was there all the time but still did not loose weight nor girth after two years. Likewise, doctors and nutritionist have been puzzled by my predicament, and though nobody has said it out loud, I'm sure some have thought I am dishonest or cheating.

Sometimes it's not all the fat person's fault.

On the other hand, I have not had any serious medical examination as to why I can't lose weight, because for starters I don't know where to go in this little town, I'd imagine it would cost a lot, and lastly, but surprisingly importantly, even I keep hoping that with effort, exercise and a good diet, I can still slim down like any normal person.

And being told I must slim down since I was nine, it's become part and parcel of being me, and the matter, well, hasn't sat at the top of my priorities, even though I'd imagine I'd lead a happier life otherwise.
Posted by Meg at 1/26/2013 11:21:00 AM