Is it just me, or is it common among weavers that with the passing of weeks, months, or years, one's weaving doesn't appear as tragic as first suspected? I still hold that pieces from the last cashmere warp were not sufficiently interesting for Santa Fe, but on their own, they have their merits. I wove them starting with the far left piece in the December pic and I did a lot of thinking, and rethreading, in the course of one warp, so I'll follow that order here. 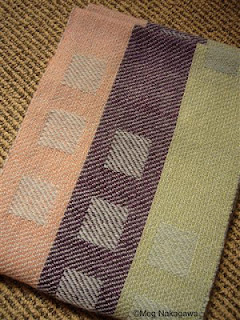 The first: best crafted, light-weight and soft, it's a good product. I'm still hoping to weave an achromatic series based on these squares for the local gallery. This piece is going to be a gift to an important relative-by-marriage who was widowed last year; to me, the personable, quiet feel suits her. I'm pleased about the piece in a non-challenging way, but it still does not present close-up interests, and with these sedate colors, it's doesn't check the "bold" requirement. 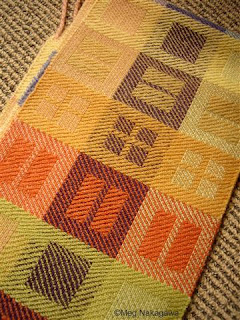 Fun. I actually like it, but my frustration shows and it's not as well-woven. Most definitely bolder looking, and with more saturated colors there is scope for further development. I'm not sure about the close-up interest: if I make the weave structure within each block more interesting, will it detract from the longer-distance view? The only way to know appears to be to sample, sample, sample. This is also potentially a gift on my next trip. 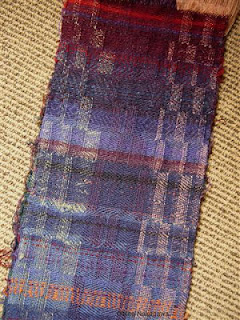 The enigma; the "Do as I say, not as I do" piece; the "opposite of what I tell my mother" piece. I hold, very strongly, that if one wants to show the structure, one must restrain the colors/values/textures, and the structural pattern is what I want to make stand out in the first instance in my weaving. So I made a simple structure.

Perhaps if the two sets of lighter warps on the sides were as saturated as the middle, I would have been less displeased. I so don't like the unplanned, unsophisticated, anything-goes look, (even though in my head I had though I had things pretty well planned, and the color gradation did work well enough,) I'm trying hard to restrain myself from telling you how much in polite company. 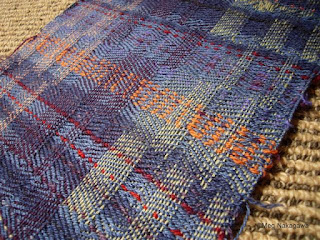 Still, there are unintended points of interest, I won't deny that. 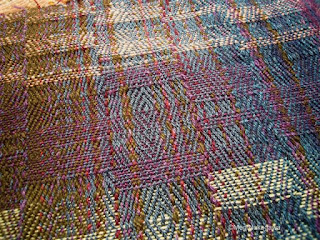 And with super careful planning, there may be scope for development, but knowing my control-freak-ness, I think it's better if I did the "unplanned/spontaneous" thing in the warp colors/textures/proportion and threading, and then tried to bring harmony to the cloth with the treadling and weft choice. 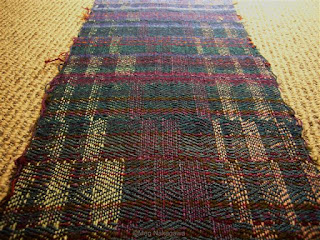 Funny how colors I don't usually like worked well in this; it's The Goddess of Weaving tellng me not to be complacent in any aspect. 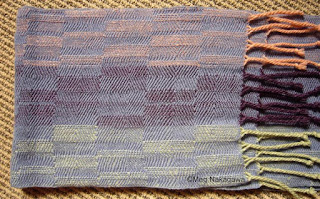 This is the draft, and I was livid by the time I wove this so there is so much weft packed into this piece and it weights twice as much as the first piece. I'm going to give this to Dad as he made a comment about how nice a pale blue looked somewhere a year ago, and he never talks about colors and such. And I am most definitely not getting around to weave his ruana in time. I also experimented with wider fringes which totally didn't work.

One of the problems I have with my cashmere pieces is the fringes. I like tight, orderly fringes so I tend to twist them a lot, which works well for my other wools and cottons, but I need to leave more breathing space for cashmere, or else they come out too skinny and hard relative to the woven part of the scarves. This is why I personally prefer hems, but this shouldn't be so hard to resolve. She says, gritting her teeth... 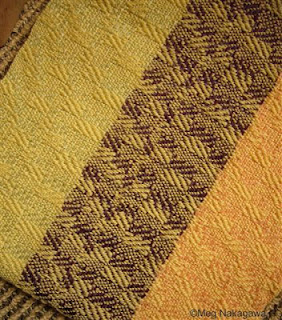 My fav from this warp was the warp-end swatch,with sufficient close-up interest. In other words, fussy, and not bold. This one looks to me very much like a kimono accessory, and I can't figure out if it's the colors, scale,or the simplicity of the repeat units.

In the course of working with this warp, I realized I have used my best yarns to make visually the least interesting pieces because I've been gun-ho on taking the best advantage of the yarn's softness and lightness; it's been a good marketing strategy, and the galleries sell on this strength. And to not overburden the yarns, I've preferred the gentle four-shaft Jack for these at the cost of more interesting structural patterns. (This was the second time I put cashmere on the 16-shaft in the seven years I've been weaving with cashmere.) But there is scope for so much more experimentation and sampling.So much so my brain almost hurts!
Posted by Meg at 1/05/2013 12:03:00 PM