So, we come home late Thursday, and there were two things waiting for me.

One was the scarf I sent to the national exhibition; it had been rejected by the selector, and the attached letter read: 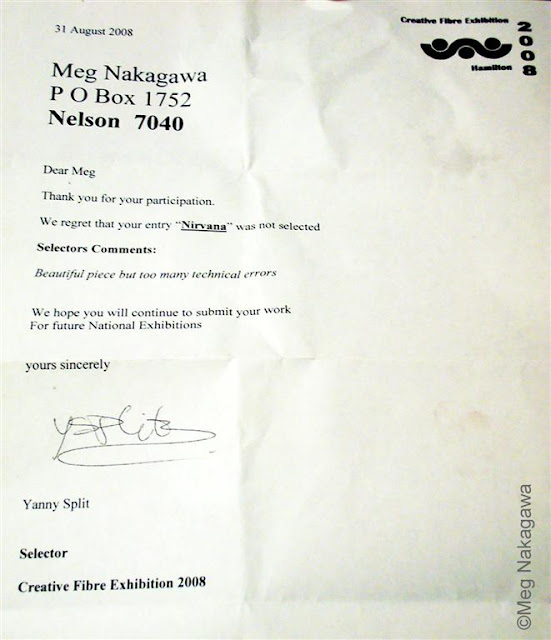 I was surprised it was rejected, though I was certain it wouldn't win any prizes. I'm not sure if I'm more offended by the disparaging "too many technical errors" without the courtesy of details or examples, or the punctuation-free, capitalization-optional sloppiness of the form letter. This is my first official rejection letter, so I don't know if this is always the way they do things.

You know I'm always quick to point out the technical weaknesses of my work, even before you have a chance to pick up the piece and have a good look. Well, this piece doesn't have too bad a selvedge, it doesn't have my characteristically long floats, and I've debated with myself whether the sett should have been looser and haven't come to a conclusion yet. But it doesn't have have "technical errors" this self-taught weaver can see; it's a sturdy piece of cotton cloth. And with an inane comment like this, I can't even agree to disagree, can I?

Once again it reminded me of my tenuous relationship with the "guild" organization. I feel like a blues singer in a church choir; neither is better than the other, but just different groups. It's also been liberating, because I don't feel obliged to participate any more just to support the organization if they can't be civil or try to help me improve. And I've seen other instances of works being rejected, or accepted, and there are definite creative differences in what some of us want to create, and what powers-that-be deem appropriate. I had thought it was purely aesthetic, but perhaps not.

For my part, I'm going to take the piece and the letter to several long-time weavers to see if they can shed any light on the errors, because I'm always for a good, constructive criticism, or alternate interpretation. At the same time, the world is too big a place to dwell on one platform for too long.