Corkscrew, Shadow and Echo Weaves: Note to Self

Cally wrote a superb post on the difference between shadow and echo weaves in reply to my question, but while looking at my past posts, I realized (blush blush!) what I wanted to know was the difference between corkscrew and echo weaves. (Design possibilities of shadow weave has been much on my mind, but Bartlett's book is on shadow and corkscrew, so I may not have been that far off, fingers crossed??) 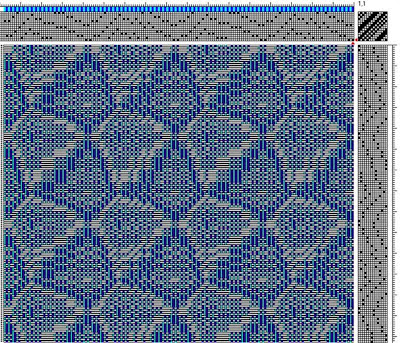 This is one of my corkscrew drafts from a while back. When I posted this, Agnes Haputli wrote to me: "Yes, it would be a shadow weave type if you would have done another tie up and used the two colours in the weft or it could also be an Echo weave if you would have set the warp closer (anywhere between twill and double weave), used a opposite tie-up and treadled any twill variation."

I made note of it, and put it on the back burner. I seem to recall deciding to use only one weft/shuttle, different from either warp yarns, for expedience and better hand, but now I need to dust my brain cells to compare and re/learn all three.

Cally's post made me realize I don't look at interlacement of drafts often enough; I do when I want to determine my sett or get an idea of the hand, and I did once or twice to learn a particular, new-to-me weave structure, but it's a also perfect tool to compare different structures. (And just quietly, I'm wondering if it's possible to create drafts that appear identical but are structurally different...)