* NOT ABOUT WEAVING -IN FACT THIS IS PRETTY POINTLESS * 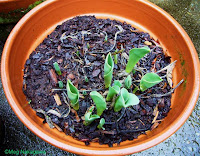 Spring has sprung in lovely Nelson, which seriously annoys me. I haven't started on my Big Winter Gardening Project, and if you think I'm panicked about the state of the inside of my house enough, I'm so in denial about the outside. But in order to look forward to the rest of my life, (and I really have to right about now,) an idea came to my mind this morning. I'm going to make prettying up our property inside and out my goal for a while, my main goal in life, alongside weaving. It's not that I haven't thought about this before, but it' been one of my goals.

Since I function better in an organized environment, and since matching my external world with the designs, ideas and pictures inside my head feels so attractive, focusing on our property and spending quality mental and physical energy can't be anything but good. I may regret declaring this publicly, but for now, I intend to stick to it.

Let my physical world be part of my package.
* * *

I've been taking, a lot about depression. People who define themselves by their illnesses have always bored me, but I realize I have unintentionally become one. I don't do it to solicit sympathy, but to solicit any info, suggestions, recommendations I can get, (and still do, thanks!,) but I so don't want to be that person.

It's still part of my package, but towards the bottom, at the back.

Having said that, clearly I haven't been coping and I having been making. Which hasn't generated any sympathy in me, but a strange empathy for all who to intend make things but have been hampered for some reason, and realistically, who hasn't got problems that hold them back from making? It's whether we can work with it or around it that makes a difference in the output.

Which led me to think of, yes, good old "art/artist". That sometimes it's not the stuff we make that defines an artist, but the life and strifes of the person who made it, almost the way we lived. This shift in thinking takes nothing away from a well-crafted piece of work, (always my goal,) but gives the artist as least as much importance as the stuff, and not monastery or critical importance, but something more fundamental. So for us makers, the key is is not to quit, no matter how long the breaks in between, or how bad the outcome appears. At least it makes me feel good to see it this way.

I like personality tests, the ones that asks you three or 300 questions to fit you in a box. I don't give much credence to the results, but I enjoy taking them because sometimes they make me think. Last week I scored less than 1/6 of an average (British) male in empathy, and lower, of an average female. Just so you don't think I'm getting all gooey. Then this morning, another highlighted my ability for empathy and my emotional life. Hum!!!
* * *

I saw my GP on Wednesday and asked to be medicated. After speaking to him, holding the proscription paper in my hot little hands, I had a strange high for a day and a half. I had planned to go to the pharmacy yesterday, and when the day arrived I came crashing down with physical symptoms. I still have no idea if they are linked or if I have a mild flu now.

When I feel well, I question if my depression is psychosomatic, partially because I once had a GP who told me so for nearly five years, but more so because I'd like to think I can fix myself with knowledge and will power. All of yesterday, I didn't want to go on medication, and yet I didn't want to waste another day not being able to think of making. So I got started this morning. On meds, with a few new resolves, and working on a few ideas.