*** This is one of my typical chronological, mishmash post. Just look at the pictures if you're interested only in P2P2 ***

Last Monday I did a lot of housework while thinking what else I could do with my P2P2 stuff, short of weaving a tiny standy uppy thingie in the Canoe pic colors, but showing the Grand Canyon pic contours.

Last Tuesday, while doing more housework, I walked around the area of the living room where all the P2P2 stuff sits, sometimes picking up and looking at the tubes. I tried to feel joy, but my mind had different ideas; I liked the layered look on the surface of the tubes. (I may come to regret saying that, though.) I tried to fight what I already know, that the inevitable next step is to weave a tiny standy uppy thingie in the Canoe pic colors, but showing the Grand Canyon pic contours. I don't mind the actual work, but I'm resisting taking the next step because I feel divided loyalty because I think it's not the kind of weaving I want to do. I don't want to find out that the step after the tiny thingie is a bigger one, i.e. a decorative, non-utilitarian weaving.

Anyhoo, just in case I needed to know a bit about the techniques, I rang Mom to discuss inlay, and Pat to discuss tapestry.  I first wanted to have a closer look at the shapes, so I turned the photo into a negative, thinking all the outlines will come out white, and all the shapes in black.  This is what I expected the B side to look like if I did weave a tiny thingie in tapestry technique or a simplified version of it in a tied weave. 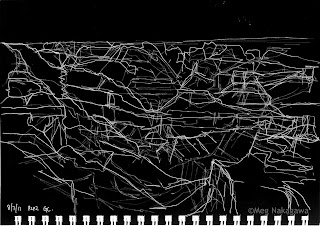 Wrong again, but this helps me a little.

Then, figuring I can't be bothered working with all the contours regardless of the technique, I tried to identify significant/outstanding lines and shapes from the drawing. Last week, half a dozen sessions of trying to isolate small areas of interest with two L-shapes came to naught. I mean, it is Grand Canyon after all; you can’t expect me to find a 2cm square on which to base a design based on GC! 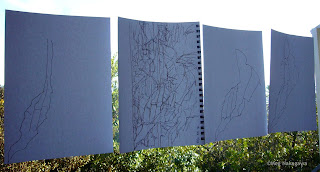 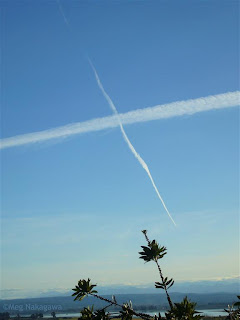 Behind the window where all the pieces of paper were taped, someone was trying to send me a message.  Is it "+" or "x"???

I woke up sick on Wednesday, but I was expecting my plumber in the afternoon, so I cleaned the kitchen, had a shower, set the alarm and went back to bed. Then Nigel the Plumber came so I got up and tried to make the best of it, so I spun.

Thursday I woke up still sick, so I made several kinds of hot drinks and breakfast, and took those, the tiny TV and everything to do with P2P2 in the bedroom, but I didn’t do much. Friday was the same.

The weekend was spent discovering the outside leak had not been fixed completely, and after much digging by Ben, (sometimes by hand because the pipes were in such a strange arrangement,) and much, much discussion with the neighbors, a viable conclusion was reached. Because I’m the “coordinator”, I couldn’t stop regurgitating and rehearsing the conversations to come, and even speculating on future objections.  I hate it when I do that.  Most of Sunday I worked on the Festival blog, playing DVDs to stop the chatter. 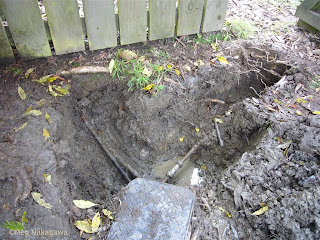 Inside our gave, next to our meter, but the fixed part (silver) is actually not ours, but the neighbors' water main; a typically Nelson quirk.

Insomnia, again, so I’ve been making simple drafts at night. On the same warp, I hope to weave Tim’s, Mrs Bone Carver’s, (an overdue art swap) and Mom’s – I’m talking her into forgetting the hearts and going for a weaver theme, but this one still needs something, probably simplification.

And, whoa, it’s Monday again. We woke up to possibly the lowest (in altitude) snow we’ve ever seen in Nelson, started the fire, Brent the Plumber knocked at 8:10AM, he finished at around 11AM; City Council guy happened to come and inspect the former leak at around 2, (happy with the results,) at long last, I got Mrs Plumber so I could explain how the bill is to be divided.  Technically for the last hour I’ve been free of the leak problem, but the chatter in the head keeps going. I hate it when I feel sorry for myself like this, when in real life far worse things are happening.  (Without going into details, if you pray, please include two P2P2 members* who are facing illnesses in the family.)  I'm trying not to let my perception of our neighbors depress me. I got stew on the fire and first attempt at sourdough starter sitting on Kilk loom.

Some years ago, a former motorcycle-gang-member-turned-successful-youth-worker said on the radio, "Get off the cross; we need the wood." I keep telling myself that.