Stash sale went well, thanks. I think as an event, it was a resounding success, and kudos to Jo Kinross for planning and organizing. *Applause! Applause!*

Eight practicing fiber artists/crafters brought their "stash" and put them on trestle tables in two front rooms of the historic Melrose House. There were lots of yarns, fabric, books, and a little bit of kits, patterns and equipment. Some had beautiful "stalls" carefully displayed, while mine looked like an average garage/yard/junk sale table, and a messy one at that. But I did well; I geuninely didn't want to bring things home so I priced my things ridiculously low. (To you Kiwis, gold and silver coins.) So people didn't have to think much before they open their wallets. Three people thought my things were worth more and gave me more than I asked for!! My best sellers were small embroidered pieces I collected which I intended to include in garments that I lugged around for nearly 30 years. From the looks of it, though nobody was cleaned out, everybody did well because the tables had gaps by the time we were packing up.

Stall holders foraged other stalls, but miraculously, it wasn't hard for me to resist; I was ever so mindful I still have too much for my stash room, and I really didn't want to add to that.

Visitors came trickling in all day, from well before we opened at 11AM, to a little after 3PM. Many were fellow crafters, pensioners, and a few art students at the local Polytech, looking for a bargain or coming to see friends who had a stall. Some were tourists, I think, visiting the historic house. I caught up with a few people I hadn't seen for ages, including Adel, whom I knew in my previous-previous-previous life in the International Students Office in 1998, and one of my favorite art teacher Judith who I was told had moved to Wellington!

The bittersweet thing to me was the number of people, and I must add older Kiwi women, who did not know what reeds and shuttles were for. I was actually astounded, and as regards reeds, I had to explain the basic structure of a loom for them to get the picture. One woman asked if they were musical instruments. Most of my weaving equipment came home with me.

The cafe was also successful, with savories and cakes and bickies. I don't know how my Madeira did, I was too shy to ask, but it was cut fare more elegantly than I was ever able to. A constant trickle of were having nice cups of coffee and tea in dainty antique cups with matching cake plates.

Sorry, I've no photo from yesterday; we pretty much had to stay at our stations all day. But Jo thinks this could become an annual event, and if so I'm so there, because I have years' worth of stuff still. 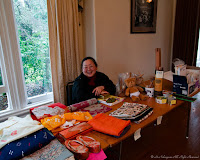