I went back to the Textile Awards show at The Refinery, and had a quiet look around again. I confirmed that I was wright in saying the technical bar was higher this year, but how that ties in with what I can make is still a mystery. Later, Lloyd walked through the gallery with me and pointed out what he liked and why, me learning his taste can be pole opposite to mine or my Textile Lunch friends'. But then were ones everybody admires very much, though none of those won prizes, nor were offered solo exhibitions and I am once again dismayed at the discrepancies. We talked about his work, about getting some of the exhibition pieces online, and was asked to help out with taking down the exhibition on Monday; nice to be asked!

At the sewing machine shop, I confirmed Ronnie Martin is running a short design workshop, but it's been pushed back to May. The organizer remembered I've had my hand up, so it will happen in due course.

My friend Nancy is moving back to Australia, (sob, sob,) so I've been on a lookout for a nice memento, and found it in Vintage Heaven. It's a piece of wire with ten cute magnets; you can display cards, photos, and fabric swatches, and the magnets are surprisingly strong they even hold thick postcards. I liked it so much I couldn't help but get one for myself also. 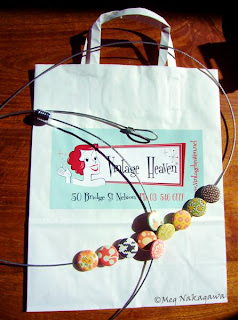 The owner of Vintage Heaven, Dominique, is from Bordeaux, and after having a chat with her, my resolve to resume studying Italian got weakened and I'm momentarily glancing at my French books; I can go see Dominique and have a live conversation in French, albeit at the most basic level. I had to take French in my convent school in Tokyo, so off and on I studied it for five years, whereas Italian, only one term in Auckland and the rest on my own. But to me, Italian is easier and I get to wave my arms around more according to my friend Gino.

I had lunch with Nancy in the cafe where we first met in January 07. And among other things, we swapped some of the magnets, because I coveted her Hounds Tooth one. When I got home, I had a message from Nola about a farewell lunch for Nancy. (Yes, that Nola is a Nelsonian.) She asked what I've been up to, and I told her, "Not a lot of weaving, but a lot of reading about weaving, collaging, some shibori, some photography, even some knitting, and I'm enjoying all of these, but not focusing on anything deliberately." She said all these will eventually seep into my weaving, and I sure hope so, but I don't feel desperate nor disparate; just mildly worried if I should be worried.

Yesterday afternoon was so dry my skin prickled, and I remembered we were to prepare drawing papers with gesso for next term, so I did that. I mixed a bit of gray into the gesso to try to get nuanced shades, but some of the drawing papers were so thin they became dismayingly wavy, and I'm not good at smoothing anyway, so overall the results were poor. Besides, I couldn't find my old ID card so I used a current membership card, and wondered if gesso and water would damage the magnetic strip. I might use one without a magnetic strip next time.

I started pasting nice photos on two of these books; one is has a gardening theme, the other a color theme. I also covered three more notebooks, two badly, but one looked good with an old SLR camera on the back cover and Ben asked for it; he's playing around with ideas on what to do with it. I'm continuing to stitch Shirt II for shibori, but I think I need better needles.

We bought a paper shredder yesterday, not because we have a secret bank account or "important" documents sitting around but because I thought it'd make starting the fire in the winter easier, and it was on sale. Anne-Marie (a Marlborough Weaver) suggested I weave with the strips, and Ben said I could collage. So I can even use this as a creative tool??!!??