Late Friday afternoon, I wanted to finish the second repeat on my second scarf. With less than 50 picks to go, I notice a weft kink two picks back, so I reverse the computer, unpick two and smoothed the kink, and continued to weave efficiently, wondering how many of the less than 50 picks I had to go to finish the second repeat. 150? Golly, I wove 100 extra picks backwards!!

So I re-reversed the computer, unpicked the 100, recovered composure, and finished the second repeat.

My loom is a retrofit computer-controlled. I don't know how a purpose-built one works, but I create a .wif file with Fiberworks PCW and feed it through an interface software. The said interface has two work-around-able kinks: lifting of Pick One is iffy, so I always include a blank pick at the start where no shafts are lifted; it allows only 999 picks (- Pick One = 998) per file, so drafts with repeats longer than 998 need to be split up.

Yesterday I resumed Scarf Two. Except several shafts kept lifting on Pick One when they weren't meant to. The interface showed no picks were supposed to be lifted, so after rebooting and moving forward and backward without actually weaving, I deleted all drafts from the loom computer and copied the second draft and began to weave. But no, this was a wrong draft. So I unpicked 20 picks, copied the correct second draft and wove again.

What, wrong draft again? No, this is not a wrong draft, but it's the wrong face! I'm weaving with Side B!

Bonnie Inouye wrote in the first pages of her book to check both faces and weave with the side that requires fewer shafts to be lifted. This draft is 2-1 twill-based, so my Side A (top) requires one not two of the 2-1 twill shaft lifted. Easy; I unpicked, changed sides and wove. But it was the wrong side again. I unpicked, deleted all files, defraged and rebooted, created a new file with a new name, loaded, wove, and it was still wrong...

Some glaring-at-the-screen later, I realized instead of chaging the face of the draft, (i.e. changing which shafts are lifted,) I kept only viewing the back of the cloth on screen and saving the draft, (same as crawling under the loom, looking up, being satisfied and climbing back on the bench again!) and weaving.

It took me an hour and a half to figure this out, feeling defeated by technology, and still in the dark as to why the shafts lifted in Pick One in the first place! 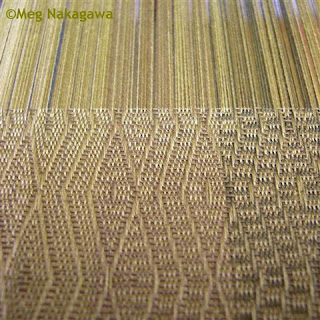