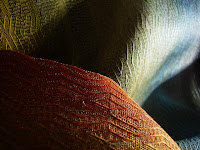 I think my short stint as a staff at the Red is coming to an end, and I'm feeling disappointed and vulnerable.

From October to December, which is our spring/summer, we were very busy and Jay was away a lot, so I was less the computer Girl Friday I was meant to be, but more a sitter. Which wasn't a problem because I liked being there and appreciated the income. She gave me the fun job of being in charge of the greeting cards, too. I always imagined that after the real summer rush was over, she and I would sit down and discuss my role and her expectations and training for the gallery stuff. Because we had no job description and only a verbal contract, as these things are done a lot of the times in Nelson.

Then I was away in January. A new staff with tons of experience joined while I was away and the first time I went back to work, I was introduced to her as, among other things, the person in charge of the cards. Well, OK, then.

But then my hours started to get cut, I became preoccupied with the house thing, I had to ask to have the days changed because of it, and I miscalculated the time I had for one job, so I worked for her for free for two days to get it done, which was done in time. But though the file is centered, the printed material didn't come out centered, which annoyed both of us.

Then I couldn't work because of the foot thing, the new person instigated new things, or at least I sensed so, my hours were further reduced, a regular task of mine was given to someone else this month without my knowledge. The new person never made eye contact with me until this month when I gave her money towards Jay's birthday present. Strange. Most crucially, I got a little confused about an important file and spent yesterday rebuilding it. And though I have no intention of blaming anyone but me, because I could have had more backups, kept paper backups, etc., the file in question was "updated" the day after I was last at work.

The very reduced hours and the changes taking place in the gallery made me take my job lightly at first, and then I started to dread going in. I know that's when I make mistakes. I was most relieved when she emailed me she didn't need me, but going in so sporadically I lost continuity and couldn't even remember when the last time was I worked without consulting my notes. I hate working like that. I became unattached to the work, Jay and Red. And Jay was becoming decreasingly thrilled to see me.

It's also been six days since our building project officially concluded, and I thought my Preposterous 2009 was really finally starting, but I didn't hold on to my sanity as well as I thought I had, and now feelings are crashing down on me. The worst part is, Claire, the psychologist who got me started on a brilliantly upward track last year, has well and truly left Nelson, so I have to go see her colleague. We met Dr Eva's brother Dr Tom, our new GP, yesterday and he was lovely, but he wasn't Eva. So I am feeling vulnerable. And it's easy to blame external reasons, but if I can't fix me, the external stuff won't go away. Ben's worried about how much the house project is costing us; it'll end up probably twice the estimates. So we had to commit not to go to the writing retreat this year. And we forgot our anniversary yesterday.

We so need some time off, but I hesitate to ask, because externally, my life looks like one long time off. So, time out on the inside for a while. That's after Jay and I have the last "talk". "Impasse" was the word she started to use yesterday, before we got interrupted by customers, but in retrospect we've possibly been building up to it from the very beginning.
Posted by Meg at 4/29/2009 09:44:00 AM