After having spent nearly four (!!) hours on the previous post yesterday, plus a Gmail phishing scare and a couple of emails, (I do wish I could think and type more quickly,) I started to weave the second scarf. No supplementary warp, no resleying, but with a sharper draft, and a duller blue-brown weft (possibly called "champagne gold" in the Japanese auto industry); the dull but beautiful weft tones down the warmer 1/3 of the warp, while creating a kind of nuanced emphasis on the structure in the other 2/3. There is less room for puckering, so the cloth will end up flatter, and the hand more to my liking. At least that's what the sample tells me. 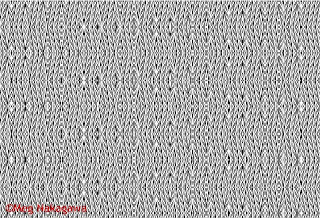 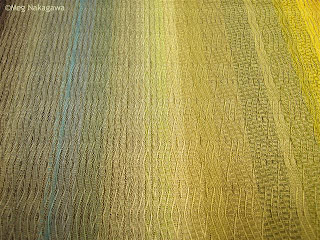 Depending on how I blended the yarns to create certain color areas, this draft, with a large area in 2-1 twill, produces what Ben called a reptilian scale-like appearance. At first I cringed at the thought, but I think it looks interesting in the sample. (The pic above is the cloth on the loom, but can see it particularly in the green areas.)

Because this warp is sett so closely, I see quite a big difference in the appearance of the cloth from the time I take it off the loom to a day or so later; the warps relax and group themselves together.

Thankfully, so far, tension and selvedge have presented no problem. So far.

Gotta go take pics at Kath Bee's Farewell gig at a toy store in town, then continue cleaning and reorganizing the kitchen, then perhaps start washing the living room and hallway ceiling and walls over the weekend. You have a good one, too!
Posted by Meg at 4/18/2009 08:00:00 AM