Saturday Daydreaming: How Long is a Weaving Life? 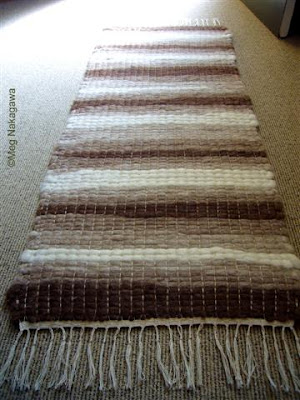 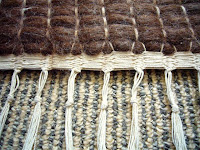 This was my first ever project, in August 1995, woven on my first loom, Ashford 60cm Rigid Heddle. 140cm was the longest I could weave considering the loom's tiny allowance on the cloth beam. Last weekend when we cleaned all the rugs and put out my mother's Christmassy rug, Ben told me which one he liked and which ones he didn't mind if I got rid of, and sadly, this one was in the second category, even though most of its life it sat on the floor on Ben's side of the bed.

I may have mentioned before, but early in 2006 when Dad had a surgery and Mom wanted to sell the house and move into an apartment, she got rid of her beloved Glimakra, on which she wove numerous rugs, her favorite type of weaving. She had it for less than a decade, but when she got it (imported it from Sweden, by fax correspondence, I believe,) she carried every piece upstairs and assembled it all by herself. She loved weaving on it, but it was too big for an average-sized older Japanese women, (she's still much taller than me,) and at one point it gave her massive pain on her left shoulder for six months. Anyway, giving away that loom to a young weaver was a sad day for her and for me. (Worry not, she promptly got a small eight-shaft sample loom, and keeping her loom count at three or four table looms in all.)

Even though I started weaving in 1995, there were more years I didn't weave than I did, particularly when I worked full time, and since I have "become a weaver" I am by no means a prolific one, spending more time thinking about, reading about, and fretting about weaving than weaving. Oh, and blogging about.

Since Mom let go of her Glimakra, I've sometimes wondered how many years I have left in me on the loom. I can see a day when my big loom is going to be too taxing on the body; already I'm able to weave perhaps a maximum of up to four hours than the seven or eight I used to just three years ago. And then I think of Peg Moorhouse, whose motto this year is "92, not out" and who still weaves every day.