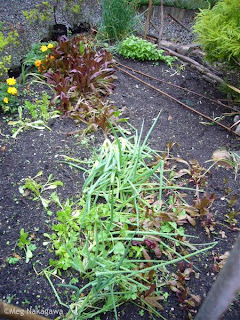 January 6. Lovely, gentle, but not tentative rain, since around midnight continues.  It's good for the soul.  I ended up not going outside yesterday, so, no weeding, nor new planting, (just a big salad,) and I won't have to contemplate it today.

But I took a few photos of the red lettuce leaves because I was getting close to panicking that I was not getting anything visual or inspirational from my lettuce patch. 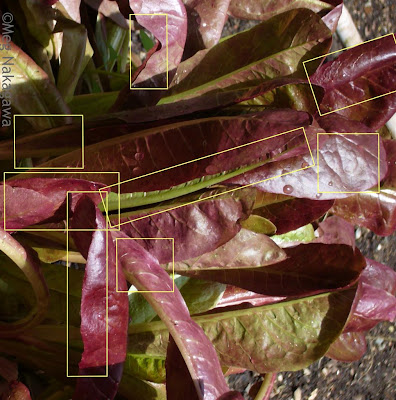 I am a details person.  Not only do I never see the forest for the trees, I seldom see the trees for the leaves, and sometimes even the whole leaf for a lovely curve on the perimeter or an interesting patterns of the veins.  Maybe it's partially due to my extreme near-sidedness.  So choosing a lettuce patch turned out to be a good choice because it is a whole area, albeit tiny, and within it a whole lot of things are happening, both on the surface and underneath, both in what I can see and what I can't; nutrients for example.  (Wow, I wasn't planning on going there when I started that sentence! The unseen??)

And here are a couple of other images I found recently. 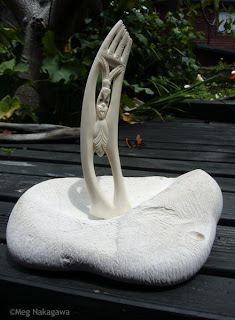 We went to see bone carver and Maori musical instrument maker Brian Flintoff on Tuesday after I finished weeding.  Among other things, he talked about how wind and water makes marks and carves stones.  (Stones shaped by wind is called, by the way, ventifacts; I like that word.) 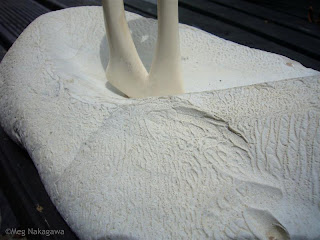 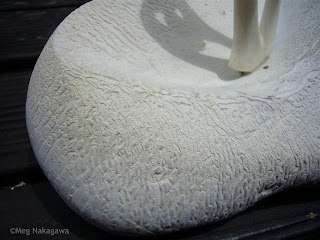 He found the base stone near Kaikoura, southeast of Nelson, famous for whale watching.  Because it's a soft rock, water has made detailed tracks rather than simply washing over and smoothing the stone.   Now that I have a closer look, I wished I asked if he found it in a river or the sea, but would I be right in guessing it probably was in a pool or some place similar where water flows in all direction? 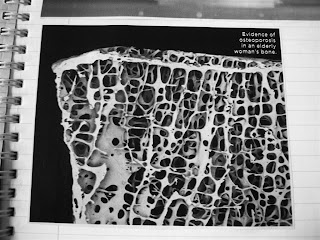 The other image I found is, believe it or not, a photo of human bones from a person who had bad osteoporosis.  I was flipping through magazines while working on the Sketchbook Project, and saw this and thought it was pretty.  After reading the caption I was alarmed, but if I didn't know it was osteoporosis, if I can ignore the fact, I still find the image intriguing.
Posted by Meg at 1/06/2011 08:22:00 AM