The Skill of Observation 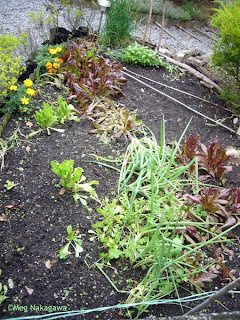 January 5. Yesterday morning was overcast and cooler, so I went and pulled out the bolted rocket, leftover bolted spinach, and dead broad beans. After that, there was little weeding needed, and I put in some more rocket and basil at the top right quadrant.  I worked for exactly an hour because we had to be somewhere.  Time limits in gardening may work for me; it's easier to get out when I know I'm going to be there only until...

This morning, I've been procrastinating. It's cool again and the plan was go finish weeding the bottom half and put in some bok choy and sorrel, but it's partly sunny and I haven't come up with a time limit so I've been inside contemplating weeding for over two hours.   (But I exercised a little in that time.)

Your comments, (they really help, thanks!) and further reading of Rachel's blog explicate the painful point, that I am really bad at observation, the skill of receiving. Because this is a lettuce patch, I see it in terms of what I need to do to make it work to the best of its ability, (I always come out more a man than a woman in personality tests); in this case to produce delicious edible greens for our table.  The photos over the last few days I've perceived more like another To Do list.  Plus I don't know if it's living in New Zealand (practical people, Kiwis) or getting older, but I have noticed I've become far more pragmatic and realistic.  So my wish lists, want lists, even the Artist's-Way-style dream lists consist of things by and large accomplish-able in my current means and abilities.  In fact, I remember a few years ago I wrestled even with the notion of a dream list.  I so lack imagination.

While I won't stop improving the veggie patch, I need to observe it as well.

(Oh, though it's a different kind of observation, I discovered my little experiment with lettuces worked.  See, in the bottom right quadrant, I planted seeds like I normally do, spread apart as recommended in the packet, with a seeds in each hole.  Each plant has room to grow, but so do weeds.  In the top left quadrant, I crammed them in rows, but left spaces between the rows, and not only is it easier to cut off the leaves, weeds don't have much room and what little growing in between I can pick out when I wash the leaves.  Hee hee.)

Reading Rachel's blog also makes me reexamine individual propensity for art making.  It's early days, I've only got up to Feb 2009, but she portrays such joy and thrill in working with concepts, designing, being open to surprises, and moving her hands.  Maybe she's naturally an optimistic happy person, (because I've noticed I'm becoming bitterer and more pessimistic,)  maybe it's her youth, (contrast there, too,) or perhaps she hasn't recorded what's been difficult thus far in her blog.  But I am amazed and elated about her art making; I picture her spirit/heart like a fairy with translucent wings in the drawings of this one artist I used to love whose name completely escapes me and I'm not going to spend another 20 minutes Googling.  In contrast too stark that it's actually a little upsetting, my making feels heavy; my mindset is weighted and burdened by among other things my age, my methods, my own expectations, my body, and words.