Where is the Storm?? 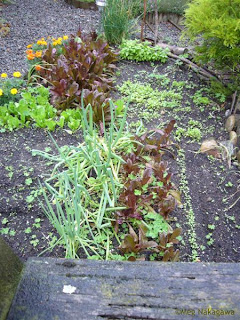 January 18.  As of 111 minutes ago we were supposed to be hit by two previously-named-but-subsequently-downgraded tropical storms. We lined up the flower pots against the house and turned the outside tables upside-down last night, but so far, though, we've had lovely steady rain.

Having waxed lyrical about habits in yesterday's post, my real concern is I'm not observing nor contemplating about the lettuce patch beyond what needs doing and what is ready to eat.  I'm not looking at it the "right" way, and I'm not sure how to.

Ali the Mentor is moving out of Nelson, a good friend's father passed away, and though neither surprised me, it's still sad.  Two super good friends who were a couple decided to go their separate ways, though they are cool, modern people who will remain great friends and we can have them over together or separately.  And my friend Liz's dog died of a heart failure at age 14.  A lot of things are changing around me.

I've heard from several of you in the last few weeks you could not leave comments. I've had problems, too: mine is usually "comment is too long, could not post" and then when I check back, they're there.  I'll keep modifying the setting to see if the situation improves. I love and appreciate your comments, (no need to mention "lettuce", either,) so please keep trying.  Otherwise, I get that paranoid-about-talking-really-loudly-in-a-great-big-stone-structure-hall-and-hearing-only-the-echoes-of-my-voice thing, you know.

Having gotten my mojo back yesterday, I'm wondering how to keep it and nurture it, and retrieve it more quickly when I loose it.  Yesterday I felt elated, today I feel contended; it's more a confidence thing, a vindication from within.  Or it was possibly just adrenaline.

I have been thinking a lot about color combinations, though not exactly thinking as I know how, but more questions and observations running in the back of my mind almost constantly.  I've had the Lambert tome under my bed for a few weeks, but I haven't opened it yet because, for now, I want to savor the-cloth-color-being-different-from-the-sum-of-colors-used mystery; I'll delve into simultaneous contrast and the like later.

Mom often says "colors are 'mamono'."  Now this is a very hard word to translate: it could be a demon, a ghost, or any variety of supernatural being, or extreme (and often deviant) characteristics in some humans, but what's common in all things "mamono" is they are unknowable/unexplainable, or more like unwise to investigate lest you open a Pandora's universe, if you get my drift.

I like to think colors are slightly mysterious but more in a fairy's world and less, one might say, sinister.  Not that my mother fears colors or experimenting with them.  And she is a prolific hit-or-miss dyer.  I like the idea of floating and traveling between different worlds of colors.