Last night I couldn't sleep so I took out the sewing silk sample card I bought when I was home a year ago.  Color samples make me feel good at the end of the day.  Do you do this, too? 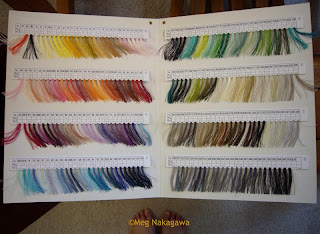 This is a catalog more or less for the stores supplying home sewers and I'd imagine other "professionals" may keep on in their work room; it should represent pretty much most colors that meet the needs of today's consumers.  With that in mind, what I noticed was... At the start of the list were White, Red and Black samples, (not numbered,) red being the old-fashioned orange-red sometimes referred to as "Shu".  (What we might consider the yellow-red and blue-red on the color wheel are at the end of the second row and the start of the third row, though they are not represented well in the top picture.)  So, some tradition survives.

Children, at least of the 60's and 70's, used this red to draw the sun.  When I returned home to Japan at age 6, having lived in Tucson and visited at least one meteor crater, observing all other children including my cousins draw a great big red circle in the sky was most alarming; either these children had collectively experienced a catastrophe they did not wish to discuss, or they were prophesying one.  After a few months, Mom explained to me that in Japan, sun was generally drawn in that orange red, even though we all see the yellow sun.  That was my first experience with color and symbolism, though I still think she could have told me sooner. 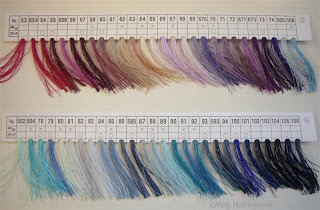 Next I noticed there were relatively few purple threads, compared to what I believe we live with, what we see in textiles and ceramics, in the flowers in gardens, and the names that remain in our vocabulary.  The most notable omission is the absence of the darkest blue purple we call "Nasu-kon" or Aubergine Navy Blue, one of my all time favorite colors.  Mom and I had noticed a decline in the use of Nasu-kon in the last decade or so.

Another thing I wasn't thrilled about was the small number of blues not influenced by yellow, compared to blues which were closer to, or in some cases outright, teal, particularly in the mid-to-dark range. 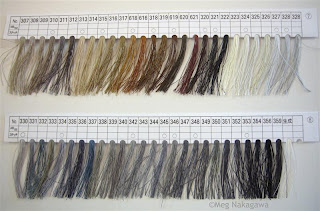 But fear not.  If you are a fan of grays, well, we have died and gone to heaven.  There are even more on the row above, with hints of yellows and browns.  Bliss. 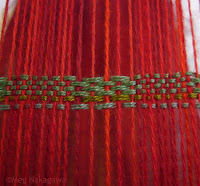 Yesterday I started my third scarf on the red warp using the dark brown-burgundy silk mix weft.  It's a most interesting color, you might even call it chocolate or hot cocoa; the scarf is very late-evening, very cloudy-rain, and very grown-up looking.  Not having woven one with blueish or purplish wefts, I was going to weave the last piece with a mid-blue-purple weft, pleasing enough on the sample.  Arter I put some cotton thrums through before I got started, I started contemplating greens again. Fortunately or unfortunately, I don't have cashmeres close to these cottons, so I'm back to carrying my tiny sample like a security blanket, pacing, wondering what to do.

After the red warp I'm going to put on the other log cabin warp; I actually made this warp first when I was thinking of log cabin; is has medium blue purple and the burnt/dirty orange used in the first scarf, and I made a warp in this combination because back then I thought purple and orange were complementary.

Using both the purple and orange in the weft in the last few pieces, I was taken aback every time I looked up because neither are boring colors, but in the warp chain they both look somewhat bleached out and unattractive, the orange in particular. 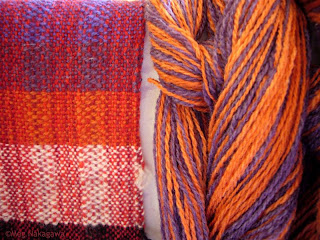 On my screen, this is pretty close to how the yarns appear in real life.  In the red sample the orange is richer and deeper, and the purple (used in the strip right above the orange) darker.  I am looking forward to a whopper of a sampling session for this warp.

The other consideration is the structure of log cabin; as much as I have enjoyed weaving the previous warp, it is, after all, a plain weave, so the vertical/horizontal changes occur across the length/width; the cloth is a series of squares and rectangles.  And because the loom I'm using has four shafts, I have been wondering if I can introduce some kind of a block element so I can stagger at least the horizontal changes.  But I'm only at a mental note-to-self stage. 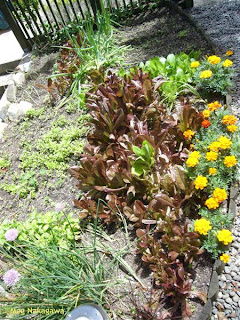