Ben and I worked hard over the Eater weekend getting the kitchen back in working order, but we're not finished; we're amazed how much there is to do to just clean a kitchen and/or how slowly we work. Ben thinks I'm so fussy, but, hey, I conceded we don't have to repaint the ceiling, so I'm not being a perfectionist. Harrumph! 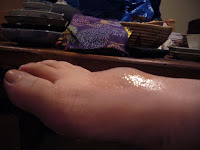 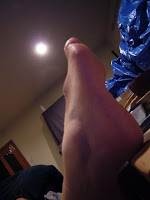 Anyway, last night, trying to look at the top shelf of the new pantry, I pulled up a wooden chair and bumped my foot against one leg. I do this kind of things all the time, but yesterday it hurt badly and I was stunned. Anyway, we carried on, (no frozen peas,) cooked dinner, and opened a bottle of bubblie for Ben's birthday, and after about three hours we peeled the sock off just to have a look!

The center of the bruise was raised and pointed like a small breast, and looking at it made me queasy. Still, I thought it would just turn purple overnight so we went to bed, but this morning, it looked a bit worse and hurt a bit more. Ben and friend Jesse thought I might have done something to a bone, and immediately I imagined not being able to step on treadles. I was still sure there was nothing wrong with the bones, but there is the possibility of osteoporosis, so I reluctantly went to see a doctor and was told I broke a blood vessel, but there's nothing wrong with the bones. I have no trouble walking, but the bruise is super sensitive so I can't wear shoes. I'm supposed to have spectacular bruising in the next couple of days, and be better by weekend, (phew!), by which time we'll be ready to resume kitchen cleaning.
Posted by Meg at 4/14/2009 05:56:00 PM