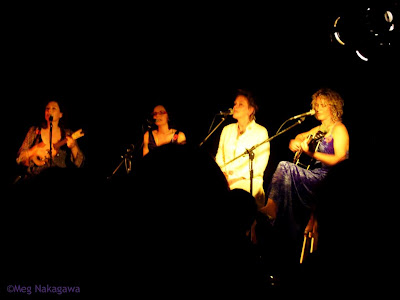 Last Saturday, Kath had her last kids' song gig at Crackerjack toy store. Tonight, The Nancies had their farewell gig. My friend Kath Bee is heading for Auckland in search of wider audience. In fact, she'll be on a ferry to the North Island in less than nine hours.

Kath went to Nelson School of Music in 2000 in the hopes of becoming a children's song writer. I quit my office job in 2000 in search of something more meaningful and fulfilling. We met at Nelson Arts Marketing's Artist Retreat in June 2006. Well, not really; Kath and Liz sang for all of us at the Retreat so I learned her name.

In October 2006, when Kath released her first CD, "Dragons Under My Bed", she emailed the Retreat participants, and I emailed her back asking to meet her to buy her CD; that's when we met. Back then, she was looking for gigs and ways to promote her CD, and I was working towards my first solo exhibition, so I always felt as if we were two babies born in the same maternity ward in the same week. For months leading up to my exhibition, Kath came to my house every Thursday (or was it Wednesday?) to check if I was still alive and to cheer me up. During the exhibition she gave three free lunch time concerts at my exhibition.

After my exhibition, I got her started on blogging and My Space so people can find out more about her and sample her songs before she got a proper website. She'd sometimes serenade me with my favorite and some unreleased songs; sometimes she'd bring me home-baked goodies.

Last November Kath released her second CD, "Dinasours in My Backyard", and held a big CD release party for kids. For weeks leading up to the party, we met every Tuesday to check her progress. The day after her release party, she flew to Auckalnd for some school gigs, and when she came back, she told me she had to try if she can make it in the big smokes. I knew it was the right move, and somehow I knew she was going to do this even before she said so. And once again we made To Do lists and planned her success.

It wasn't until last Saturday at Crackerjack that I realized a dear freind was moving to Auckland. Up until then I was only too excited for her and her career that I didn't realize I would be loosing a wonderful collaborator/coconspirator. And my best text message translator.

Kath is my friend who will sit happily amidst my clean laundry and drink tap water when I don't have anything better to serve. I will miss her terribly, her little red car coming down the driveway, and hearing her happy voice chiming, "Sorry, I'm late, again, but it's so funny... " before I see her. And our laughing our heads off at life's trivial joys and follies.

But more than that, I hope her path to readhingi more children and greater success will be a happy, if not easy, one. She is the Margaret Mahy of children's songs and she should be known to children beyond Nelson, and New Zealand. (In fact, there is a tiny fan base in Texas, as well as somewhere in Canada already!) And I congratulate her courage.

And when I stop crying, I must think of something I will do this year that takes a bit of courage on my part. 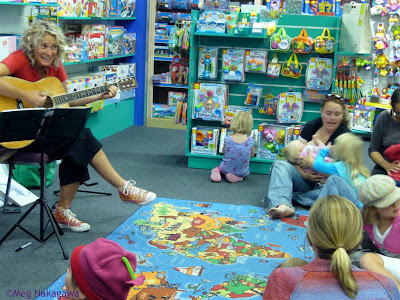