Last July, I tried one of my cotton drafts (woven usually around 33EPI) on a merino warp with a merino/mohair weft at 18 or 20EPI. I hated it. I knew the draft would be magnified, but until I saw how much and in what way, I had no idea it would turn out so ugly. That piece sat under my couch until early this year when I gathered all the unfinished pieces from various hiding holes and finished them.

Fast forward to the present cotton warp. After all the hoopla of threading, sleying and first sampling, I started to see there is another issue with scale, and for want of a better term, I'll call it the human scale, until you tell me otherwise. .

If I held a grain of rice and told you I had composed a haiku and written it on that grain, you might believe me because I said so, but you probably don't care, and I doubt you'd worry about the literary quality of the haiku. My sample feels like that.

If I showed you my sample with a Schacht end-feed (red pirn) shuttle for comparison, and told you I've 96 ends of 2/60 cottons in the warp and 2/20 and 2/60 cottons in the weft, and also showed you the draft, you might believe me, but you mightn't care, and I doubt you'd worry about the aesthetics of the draft, because it is just too tiny to see in a way the pattern registers. 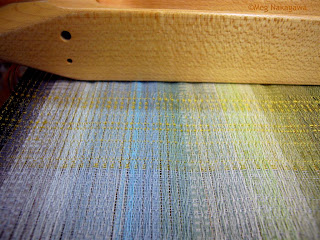 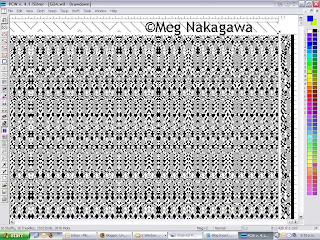 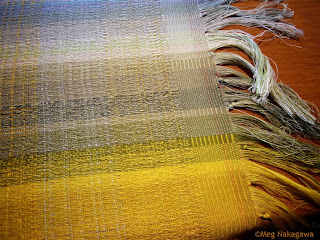 Likewise with a less fussy draft. 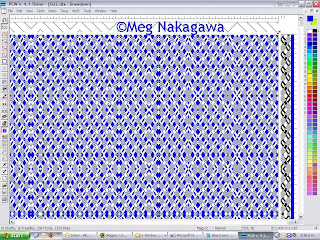 Part of the reason this didn't work is the sett is too close and the cloth looks warp-faced, which is not what the drafts were intended for. When I weave with 2/20 both ways, the sett and pick are roughly balanced at around 33EPI/PPI. On closer inspection, the 2/60 warp threads have fluffed in the finishing, but the same sized wefts have not, looking steely and unattractive. Do you know why this is?

More importantly, though, at this scale, it is difficult to see individual warp ends without getting your nose right into the cloth, and they seem to need to be treated in groups. There are, in fact, areas which looked so dull in draft, but not too bad in the cloth, and I suspect it is because of this.

So it's back to the drafting table. I could weave the whole thing in plain weave, which would make a colorful obi for a child. I could resley so I can weave in a more balanced way. Or, I could concoct a few more drafts to suit the threading and sett.

Not liking the color transition seems to be the least of the problem now. I need to raise the pleasure/hard-slog quotient.
Posted by Meg at 4/06/2009 02:57:00 PM