Closure 1: I was So in Love 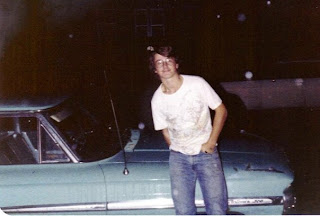 When I was 16, I fell in love with a beautiful boy. “Head over heels” didn’t do justice; I believed he was my epiphany. I didn't know his name, so I asked anyone who glanced my way long enough; then later, I asked just to hear his name said out loud. Liz rescued me and organized a birthday party; my 17th. And the dating commenced.

We must have shared lovely moments. I remember the first time he walked me home. But it was a teenage thing; tenuous, emotional, unsettling. He was a lying, cheating, two-timing bastard, and I was a drama-queen-snob-bitch. Still, we stuck it out for five years, because we were kindred spirits; insecure, proud, and strangely devoted.

Shortly before my 22nd birthday, he dumped me and married another, but there was a code of silence and I wasn’t to know for a long time. She had been the main, and I the alternate, but I had faith in the “us-ness”, even when his family made their allegiance known on Christmas Eve. I don’t remember a final good bye but I’m sure I went into a tirade more than once. I do recall the evening I went to pick up my things; in his dark empty apartment was a box marked “dishes” in her handwriting. His closure.

I spent my 20’s being a victim; anger, doubt and false bravado fueled me. I jumped into relationships, then regretted being in them. I drank excessively. I invested my energy into work, but my personal life was lonely. Everybody appeared to have mature, inner peace and settled personal lives and I genuinely wondered what was so unlikable about me.

From time to time I fantasized having a chance to get in the last word, of gloriously, triumphantly, yet elegantly rejecting him, but we lived in such different worlds I knew my chances were slimmer than none. Since Google, I occasionally searched in hopes of finding him in a humiliating predicament, only to read he's done well in his chosen field. As I knew he would.

When Liz suggested I get on to Facebook, and in the course of learning about it, I found him among Liz's friends. I realized there was a chance our virtual paths may cross, but thought I'd have months to ponder the scenario. This could be my "gloriously, triumphantly, yet elegantly rejecting" finale. My closure, of sorts.

Tuesday night, after I came home from work, I saw a Facebook message with his name. I was flummoxed, but found myself automatically clicking to be his friend. As I do. And then to acknowledge, I wrote a short condolence about his younger brother. Then came an email in response, and my flustered attempt to reply, loss of a long draft, and finally, chatting real time and catching up.

Wednesday, I was surprised at the absence of anger. There is acrimony I’ll never forget, but then I was equally mean, so we're even if we were to tally the scores. But it no longer seemed to matter. We had grown up. I heard Liz’s Mom’s rumbling tummy laugh from up above; “Well, it took you long enough.”

For the first time in 29 years, my life looked like a continuum, not a series of disjointed scenes. I felt as if I found my missing limb, not him, but my past self, and I was once again intact. I realized I was never ostracized from Washburn High School Class of '77, that I needn’t have felt apologetic about wanting to be included. Nor was I exiled from my beloved (except in February) Minneapolis. The sad girl who’d never been invited to school reunions was allowed back in.

(I have no artifacts from my high school days, except my high school diploma. The pic above and one of Liz in the next post were downloaded from his FB with permission. This one was taken by me and the car was old even then.)
Posted by Meg at 3/22/2009 07:40:00 PM