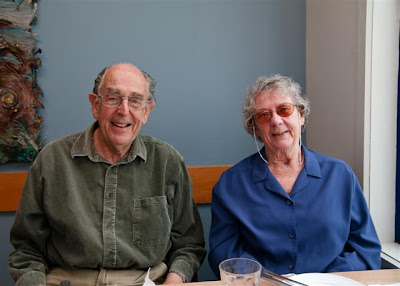 Monday night we got a telephone call we awaited for months; our friends Ron and Puffs arrived at Nelson. My dad worked with Ron at the University of Minnesota in 1961-63, so I was three when I first met them. We've somehow managed to meet up every decade or so, in Japan, Minnesota, or Melbourne, with or without my parents. They're the only ones we've managed to keep in touch from my parents' Minnesota days.

We spent Monday evening and all of Tuesday reminiscing, retelling stories even Ben knows by heart, and my discovering a few new or forgotten details, whilst visiting Nelson's wineries, potters and an eatery with a spectacular, typically Nelson view. And hearing about their grandchildren and telling them about my parents' grandchildren. It's interesting how the retelling never gets old, and how I am quickly three again, Ron mentally picking me up and putting me on his shoulders. On the other hand, they've lived in Australia for over 40 years, (they're originally from Liverpool,) and we in New Zealand for 14, so we did engage in a bit of Trans-Tasman bantering, and musing and sharing of implants' views of our adopted countries.

The cherry on top was Puffs, (whose real name is Elspeth, which I didn't know until possibly 1988,) selecting Tapa for her upcoming significant birthday present. Watch out Melbourne; this is my first piece to cross the ditch that I'm aware of. Well, Melbourne isn't that far, so it's high time we paid them another visit, really. 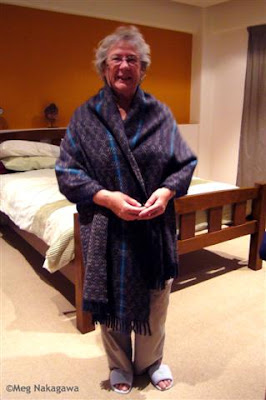