I NEED YOUR HELP 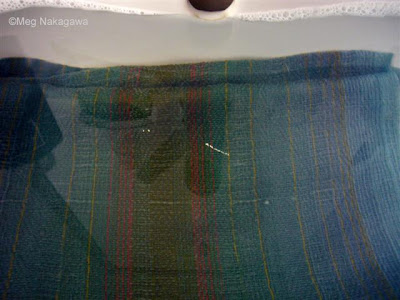 It appears it is paint, possibly oil soluble. (EDIT: I had no rhyme or reason why I said oil soluble, other than that it didn't flake off like I expected acrylic paint to do. Donno....) I tried hot water, cold water, diluted regular laundry liquid, baking soda and gentle brushing, but the paint appears to have soaked into the fiber rather than sitting on the surface, and is not flaking off. I am thinking of testing turpentine and methylated spirit on a sample piece, but if the paint is in the fiber, it'll entail soaking a bit, won't it? Oh, Gwoowwd, why me?

Am I now officially the most post-delivery-accident-prone weaver, or do you have have tales to tell also?

The good news is, this piece looks stunning underwater. So shall I sell it as part of a bathing outfit?

PS. I have thought of steam iron, but would that soak the stuff further into the fiber or make it flaky?

PPPS: Spoke to the cotton supplier whose dad happens to be a painter, and recommended meth. I think the verdict is out.

PPPPS: Spoke to Jay at the gallery and she's offered to buy the piece, but I said I'd try meth anyway. Meanwhile, she's look up her book of stain removal and advise.

PPPPPS: Riki the tile guy and Taueret suggested superfine sandpaper, but I don't think the threads are thick enough to withstand it... But please read the next post.

Update: I dabbed cotton in meth, placed one under the mark, one over and gently patted. Absolutely nothing happened, except the warp around the area is getting much to fuzzy. I am disappointed, as I had envisioned the point quickly dissolving in meth.
Posted by Meg at 3/18/2009 12:51:00 PM