Break time. Scarf 3 is 40% done but I'm physically exhausted so it's moving slowly and with great difficulty. The "zing" is there, but because I added warps in isolation, not in bunches, they look lonely. I knew this, but I forgot about it in the excitement of the moment I was planning the supplementary warps.

I'm weaving this draft. Which looked OK on paper. 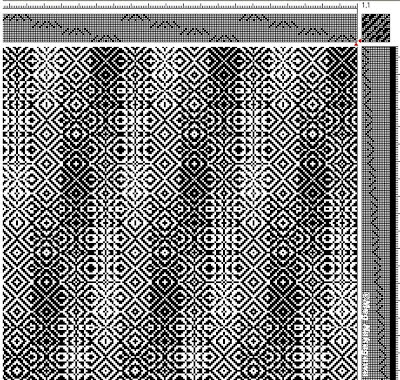 Or so I thought. But in my sample, there are streaks of wefts that look like technical errors and if you look at the draft with that in mind, they're all over the place. I don't know much about lace weaves, but if these areas were larger, these might be considered the "crammed area inside a lace weave" to make them legit. I tried tampering with the draft, but I didn't like any of them. so I'm weaving against reason, in defiance, as a symbol against my recent troubles.

I think they look like the fat streaks in tussah silk cloths. (Streaks most visible in the mystery weft portion.) 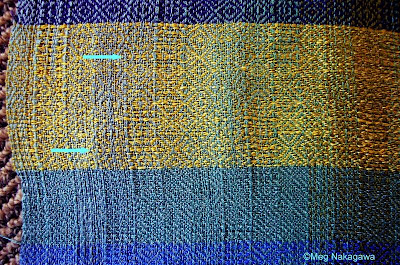