I have three and a half days to 1) weave two more scarves, 2) finish and collate my scholarship application, 3) wash, press and send off a knee rug to Blenheim for a wee guild exhibition, due Saturday, and 4) plan how we'll hang the scarves on Saturday at Fibre Spectrum and get necessary gear at the hardware store.

The fourth scarf was a no-goer. It's finished, alright, but much shorter than the others, and a few mistakes needs mending, because the metal rod I used to attach the warps to the back beam was so far forward it was pressing against Shaft 16, and not all warps lifted sufficiently. In the end I took the pirn out of the shuttle and wove with just that.

Most crucially, something must have happened to the tension while it went around the cloth beam or when I was taking it off. Maybe I was in that semi-conscious "I've got to get this done" mode and didn't see something going wrong. I was composing the exhibition blurb/artist statement in my head, trying to tie Paul Newman to ancient Japanese colors. Anyway... 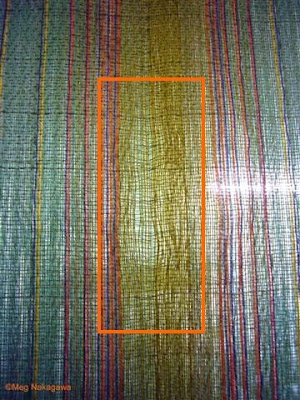 It's a strange-looking piece. I would have liked to have shown it because it doesn't look like anything else I've done or have recently seen, and called it "Japan, 1008", as The Tale of Genji was supposedly written on that year, and accordingly there have been events and special publications in Japan all year. It looks so ancient to me. I suppose I should get cracking on another warp zingy warp.
Posted by Meg at 10/27/2008 07:20:00 PM